On the Topic of the All-Star Game 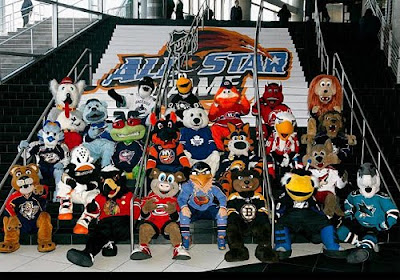 I know there are not many people out there who like the concept of the All-Star Game, which is fine. I enjoy it and I think it's something that's good for getting the game out there if you have the right people there in the first place. That said, with the roster of players to be chosen being named-- it's kind of odd when it comes to some players being included and excluded.

Let's be honest, though, odds are some GMs are telling the powers-that-be that they don't want so-and-so in the pool of players because of one reason or another. Fact is, the best players should be named-- and if they don't play because of a mysterious injury....so be it.

But, when you look at the pool of players, it seems to be liked across the board for the majority. Inclusions of the likes of Dustin Byfuglien and Tobias Enstrom show it's not always about the marketable players, but guys who have skill are being recognized. The fact that Nicklas Lidstrom is the only Red Wing from that super-group of a team makes me scratch my head on why someone like Henrik Zetterberg isn't on the list.

Of course, some of that has to do with the inclusion of every team into the All-Star Weekend. First, there's only four teams who won't have a player in the All-Star Game, but will be represented in the Rookie Skills competition-- Florida, Phoenix, NY Islanders, and Buffalo-- which I think is a bit asinine to only have them in the one day and not the other. Secondly, this game should be about showcasing the best players the NHL has to offer-- not to show all the teams out there in the league; because legitimately they won't be shown to a national audience-- why play the sympathy role by throwing them a bone?? Because it's the right thing to do?? It's a cop-out...but so is the selection process, both fan voting and powers-that-be process; though that's another argument for another time. If a team doesn't have a star, you can't force them to provide one when they'd be taking a spot of someone more deserving.

Another thing that bugs me, aside from everyone being represented, is the fact that five of the six goalies in the pool are from the Eastern Conference. If that's not a case for "East Coast Bias" then I don't know what is. In any case, this is a prime example of the best players being picked, regardless of pressure from someone like Jonathan Quick, who's have a solid season out in LA......oh, and ROBERTO LUONGO!! It's a bit interesting about the five East goalies, but it's something that helps my first point that it should be the best players in there, regardless.

This game is for the casual fan. This is to get people who may have been hooked with the Winter Classic a little more knowledge about the game and players and the teams. Granted, they won't get the full feel if my ideal of "Not all teams get in there" gimmick works, but like I said-- they won't see them on national TV anyway, so the hell with it. The point is, this isn't going to be the hardcore fans who actually are offended this is still going on. This is for people who just like the game in it's purest shinny form and for the casual fan who will have time to learn some of the bigger name players and the teams they belong to; which could rope them into watching a real game and get the actual feel for the game rather than the shinny of it all.

If you don't like it, you don't have to watch it; but don't bother those that do enjoy it; regardless of why. If you watch it-- maybe you can debate on why one guy would be better than another or just mimic it MST3K style like I probably will. Just because I like it, doesn't mean I can't mock it.

(Also, if there's a fantasy draft with the Ice Girls of the league-- I want in on that voting.)
Posted by ScottyWazz at 10:30 AM

Email ThisBlogThis!Share to TwitterShare to FacebookShare to Pinterest
Labels: All-Star Game, Fantasy Drafts, NHL Fans, On the Topic Of...