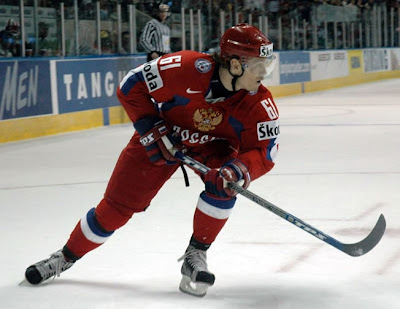 Maxim Afinogenov joined Evgeni Nabokov and Denis Grebeshkov in heading off to SKA Saint Petersburg for the 2010-11 season in the KHL. They will join Alexei Yashin, Sergei Zubov, Sergei Brylin, Robert Esche, Alexander Korolyuk, Oleg Saprykin, and Joel Kwiatkowski as former NHLers playing with the club. Obviously, the team is trying to show that a team of unwanted NHLers could take down the KHL game-by-game....or not.

While it's a bit of a surprise that no one wanted Afinogenov at the price he wanted (well, not really), the interesting part is why they are going to SKA over other teams there. It's almost turning into what Ak-Bars Kazan was during the lockout, who had Vincent Lecavalier, Alexei Morozov, Ruslan Salei, Slava Kozlov, Brad Richards, Alexei Zhitnik, Dany Heatley, Michael Nylander, and Nikolai Khabibulin. Granted, the caliber that Kazan had was much higher than others because of the lockout, but still. It's almost like a who's-who of players on a team like that.

While the loss of Nabokov and Afinogenov could sting, it's a small sting. It's not something like if Alex Ovechkin, Sidney Crosby, or Drew Doughty would make a mass exodus to the KHL in the same time-span while they are in their prime; because then that would be a little worrisome. The NHL could even lose one, like say Ilya Kovalchuk for example, and still be fine. And maybe these guys heading over can actually prove they are worth it, albeit in a lower tier of competition for the most part, but it'll be something that could be a stepping stone to their next contract being in the NHL, like Nikolai Zherdev did. But it's not like these guys were really on the top of their game when they left, though some may debate Nabokov and how much of a loss he could be. That said, he won't get the money in the NHL he would in the KHL. They may be missed in some aspects, but as a whole-- they're going to be guys to replace them in the end.

I don't know where the money is coming from for SKA to sign all of these players, but it could be hard pressed to beat the star power they seem to have right now. Whether or not that will translate to the ice or not remains to be seen and as we saw with the Lockout version of Ak-Bars; having the biggest names and the highest paid players isn't always the best way to go about things. Luckily, with former NHLer Darius Kasparaitis behind the bench as head coach, you can bet he's going to be able to deal with the NHLers coming over and get them to work as one unit rather than individuals.

My hope, though, is that they will change their jerseys to something of a checker patterned to really validate my musical references to ska.
Posted by ScottyWazz at 1:45 PM