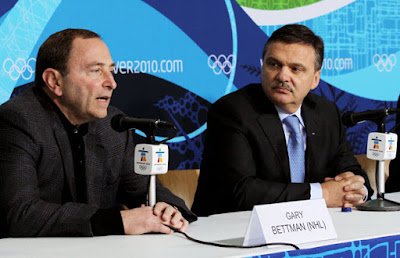 On Tuesday, the topic at the World Hockey Summit was the happenings between the NHL (and rather North America hockey in general) and Europe in terms of some teams "over fishing" the European leagues in terms of talent and plucking the home-country leagues of talent, especially in terms of their junior leagues.

This ideal of "over fishing" was brought to life by Slavomir Lener's presentation about the how the Czech and Slovak juniors league have had their talent taken away by some agents luring them to North America to play in the Canadian Hockey League or even the NHL. Lener is the director of the national teams in the Czech Republic and showed that with the performance in the World Juniors and how the Czechs haven't been on a WJC podium in five years. Also, he stated that NHL GMs are noticing that the talent that was there like Jaromir Jagr and Marian Gaborik are being turned out much anymore, which....I don't know how that's the fault of developing in North America, but whatever. The main point is that Lener said because of the players leaving their home country early, the never develop into what they could because they're lured away by the allure of the NHL and North American hockey in general.

While, Lener does have a point, the fact of the matter is that I don't see how players migrating from Europe to North America is a big fault to the country's standing in the World tournaments. Regardless of where they are playing, they are still going to be of their nationality and still play for their country. If it's a philosophical thing between playing in North America and then for your home country-- that I can understand due to the different schools of thought each coach has when it comes to players. However, the CHL still has a rule that only two imports can be on a team, while the NHL has to deal with a transfer issue when it comes to getting players out of a contract in their home country's league.

Yet, why should the CHL be ran down because of the fact that they give the exposure and training for the next step, which is the NHL?? If anything, the model they have should be taken by these junior leagues in Europe and maybe implemented in some ways over others. It doesn't seem like Sweden and Finland have issues of their junior leagues being completely run down with the CHL looming overhead. Maybe it has nothing to do with North America's intrigue, but just the lack of structure in the leagues over in the Czech Republic and Slovakia. Plus, you have other countries, like Switzerland, who have some guys in the CHL and even in the pro leagues in their country and succeeding in the junior ranks; so I don't know what's going on with the Czechs, but it's nothing to do with the North American game or not "fully developing."

Also on Tuesday, Rene Fasel of the IIHF was a bit on the heel side of things on this, by going on to say that the NHL won't get a division in Europe while he is sitting as the head of the IIHF. Fasel also said that the NHL being in Sochi Olympics is a must.

As far the the Sochi Olympics goes, I think it's a formality; to be honest. I totally agree that having the NHLers in Russia playing-- especially with Alex Ovechkin already saying he's going and has the blessing of his owner, so why not send the rest of them??

As far the NHL division, it's kind of a preemptive strike against the NHL, who is holding their Premiere series in Europe, maybe scouting out the territory. And why should the NHL want to go to Europe, aside from more money given to the league and teams. The teams are out of the control and if they are going over to Europe to have another 10-12 leagues, that would thin out the talent to the point where it'd be unbearable. If anything, the trips to Europe or less about scouting the territory, but to give the people a look at live action they wouldn't be able to see unless they wanted to drop a nice sum of cash to not only travel there, get shelter, and then find tickets. This way, it's closer with some decent teams and decent action.

And in the end, I don't think the NHL European division would be the best for the league or for Europe. The fact these countries and territories have their home leagues is something that would instill a bit of pride and there's no reason that the NHL should disrupt it. Even in North America, there's a lot of pride in the minors and some people who dislike the NHL because it messes with the minor leagues and leads to teams moving because of it.

For what it's worth, the state of hockey in Europe is something that should be looked at in some cases. When it comes to the Czech and Slovak leagues, that's a matter of getting better coaches or developers over there to teach these kids and actually develop them so that they can leave at 18 or even make those league desirable for the younger generation and be a pioneer of sort. The reason some kids leave is because of the fact they feel they're ready to get to their next level and aren't content with staying at home and maybe getting stuck because they waited to long. You can't fault other leagues or what-have-you for the shortcomings of your own program.
Posted by ScottyWazz at 9:30 AM