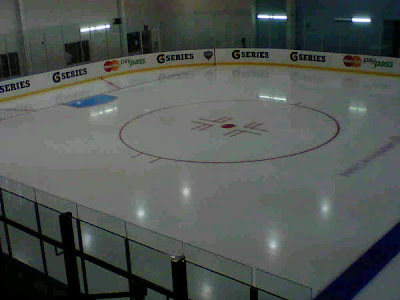 Alright, since NHL's Concept Car of Rule Change Expo has ended; it's time to take it all in, see what worked, what didn't, and where common sense all lands for me personally. Sure, the craziness that ensued was something to get the internet a-typin' with rage and debate. We'll take it step-by-step (day-by-day) when it comes to some of the ideas that came out of camp and see what'll stick when thrown at the wall.

-Icing: For many, this will be the rule that will probably be the first in the line to change. Both a no-touch and hybrid, which is up to linesman digression, were tested out. With the issues that have happened recently, you can bet that no-touch icing will be the thing that gets called out to the floor and utilized. The idea of a hybrid seems alright in theory, but there's too much of a gray area and nothing uniformed for the linesmen to look at; thus making it a dicey move to go with. While Sean-O had an idea of moving the icing line up so that it's different from the goal-line, but in the end, it could get a little crazed to begin and may never catch on.

-Face-Off Techniques: One of the interesting spots was the "choose your opponent" option should someone get thrown out of the face-off circle. It would definitely allow for more options and make all the players self-aware when it comes to trying to jump the gun. Another thing would be the "lacrosse face-off" option, whereas the ref puts the puck in the circle and blows the whistle to start play. If someone jumps, possession goes to the other side. The lacrosse option does seem like it's a bit much, but something that would be too much shades of gray. Finally, a penalty line which is a foot back from the dot if a player jumps. Again, a gray area-- especially with linesmen often stalling and holding the puck much too long on the draw. All of these are very innovative, but the "choose your opponent" option may be the one who wins out in all of this, if any of these rules are implemented, as it would keep the game with the same flow; but as more intrigue in terms of match-ups.

-One Dot Per Zone: One change that created some of the most buzz was the one face-off dot per zone. It turned the attack zone into a Cyclops looking area rather than boobage. This is also probably one of the most extreme changes. If nothing else, the change could create the most own goals and goals off the face-off ever. While it won't happen in our lifetime, the fact they tried it out seemed to maybe foreshadow what could happen. Of course, this sparked my mind of the NHL using this as their "Concept Car" when it came to this camp.

-Net Gains: Some changes to the goal area, from a plexiglass top to the net for better sight on goal reviews to shrinking the shallowness of the net in order to create more wrap-around chances and area behind the net to a thinner mesh used around the net. While I only support the plexiglass, the isse of where a water bottle would be placed is one thing, as well as keeping it clean and even with all the bodies in the way would only be a band-aid for the problem. The thinner mesh seems silly due to the heaviness of the shots and could create a record in net repairs if used.

-Officiating From On-High: The option of the second referee off the ice surface, lording over the play is something I can get behind, though you can debate he was doing the same job on the ice. At least with this, the players would be more away seeing him tower over the ice surface. One of the ideas that were looked at, which could be the towering refs domain, is the "bench crease" to show the refs how far out players are from the bench when they change. While this does save the refs from themselves, as well as players knowing when they can go; it almost starts to look like a D-III basketball court with all the lines for volleyball and shorter basketball courts. Another "good in theory" idea, but you would hope the players wouldn't have to be babied like this, as they are professionals. Plus, it's not like those rules will be bantered over if someone jumps just a bit early while the guy he's coming off for is still out of the crease. Now, if they use it as a DMZ and any amount of players can be in that area without getting caught-- I could see getting behind that.

There were some others like the offside rules of not being able to change or the face-off going into the other attacking zone should it be that way-- but I'm neither here nor there about that. In the grand scheme those ideas I mentioned were the most extreme in my eyes and it's doubtful that many of them will be accepted, sans two or three. Obviously, there will be some other leagues playing the role of guinea pig to test these out if not fully accepted, which would cause those fans to get up-in-arms over things. In the end, to change for change sake is something the NHL doesn't want to do, and they've said that, which I believe. They get enough flack as it is for changing some aspects of the game, no matter how tiny. However, many GMs have said the no-touch icing is a no-brainer and if only one rule gets adopted, it should be that. They are onto something with that and fully back them in that.
Posted by ScottyWazz at 5:10 PM