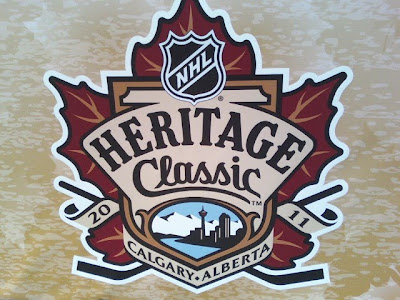 Today, August 4th, the NHL held their press conference to talk about the Heritage Classic that will be held at Calgary's McMahon Stadium on February 20th, 2011 between the Calgary Flames and Montreal Canadiens. Luckily, myself and The Girl were able to attend, and thanks to Nicole Buckley and the NHL for allowing that to happen.

The experience is none like I've ever been to. Sure, I've attended plenty of Drafts, but there's something about this press conference that was different and had a bit of a more personal feel to it all. Plus, it wasn't a whole slew of reporters, so the intimacy level and the ability to get some kind of one-on-one time with some of the players and team representatives (which I'll share in a bit) was pretty nice to have to. There was some kind of buzz around it because it is a special game, even if some think that the gimmick may run it's course if overused. In any case, the NHL did a great job to set-up the stadium like it would be for the game and to have the fancy dias with the boards as a background.

Off the bat, the logo itself (seen above) is something that's simple, but works amazingly. With the mountains and Calgary cityscape on either side with the Bow River separating the two, it's something that is very well done and up there with one of the better event logos. As far as the jerseys-- first the Canadiens don't stray much, as they are going with close to their same jersey they use now, but I believe with some different font type on the nameplate and numbers.

As for the Flames, that's the most extreme change. First, they are using a modernized-retro-hybrid (I'm patent-pending that, folks), which combines the Flames colors and the style of the Calgary Tigers from the 1920s. It's a great idea to bring the heritage of Calgary hockey, but keeping the Flames logo out there to the forefront. The one interesting thing to see is the cream colored pants that the Flames will wear with the jerseys. Not since the 1974-75 Washington Capitals have there been a light color pant used in the NHL and while it'll be good for a one-off game, it still be interesting to see how they look period-by-period.

The intimacy that I talked allowed me to get some time in with Flames player Curtis Glencross. I asked him about what it felt like playing in a game like this and how he feels about the new duds.

Next, I talked with the Flames President Ken King, who was able to talk about how the jersey came together and how the idea came together about getting the WHL's Hitmen to play the next day against the Regina Pats.

Also, we got to to talk to Kevin Weekes, who was the MC for the event and very chill to talk to about the game. Sadly, didn't get to tape it because I'm a goose, but still. Nice to share some stuff with a former player of the game about one of the bigger events in the game.

All-in-all, it was a great display and should be able to bring a lot of buzz to Calgary and the hockey community around it. The one thing I forgot to ask Mr. King and something he brought up is the weather. Calgary weather is very....odd, to put it lightly. It'll be interesting to see how the weather will hold up for this game and if it'll be a factor in one extreme to another. Hopefully, I'll be able to do a post about the experience at the actual game, but only time will tell.
Posted by ScottyWazz at 9:00 PM