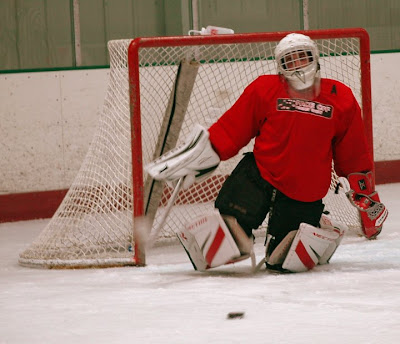 It's very rare that we do an AGM on a goalie still playing and even rarer that we do one with an adult league goaltender. However, with this being coinciding with Face Off Hockey Show's birthday (DOB: August 8th, 2001) and none of the rest of us being goalies-- we'll pay tribute to this fine fellow and hopefully he can build off of that. This week, we'll take a look at Marc "With a 'C'" Pitonzo.

Pitonzo, born and bred in Severna Park, Maryland, never played organized hockey growing up. In fact, he only got into the goaltending role because of his brother Jonny strapping the pads on him and firing tennis balls and the like at him. In fact, Pitonzo first ventured onto the broadcasting side of things with FOHS and decided to start playing at the beginning of the 2002-03, after he bought his pads from eBay.

Pitonzo joined the Blue Badgers of the Laurel Adult League in 2002-03, however he missed the first part of the season due to commitments with school (read: Fraternity rushing), but was able to join the Badgers with the second half of the season and take over for Brad Kirchner. In his rookie season, Pitonzo went 12-2-0 in his first season with three shutouts and help backstop the Badgers to the C-3 Championships in the LAHL, letting in only one goal in the two-game Championship series. With his rookie year under his belt, Pitonzo went into the second season with a big win under his belt and a new name. In 2003-04, the Badgers turned into D's Nutz and Pitonzo move forward playing 18 of the 24 games in the season going 13-4-1, but after making it to the C-2 Championship, the Nutz lost in a three-game set, two games to one.

For the 2004-05 season, D's Nutz had a huge turnover in their system with a couple of players moving away, but had more talent coming in-- as per usual with adult hockey. It was a bit of a shaky season for Pitzono, playing only 16 games and winning only ten, but shined in the playoffs-- helping to backstop another championship team for the Nutz, his second in three years. Continuing with the shakiness, Pitonzo's 2005-06 campaign may be his most forgettable, with 20 games in and only 10 wins to his name. The Nutz didn't fair better, with them going out in the first round of the LAHL playoffs.

Yet, it was the 2006-07 season where Pitonzo shook out the cobwebs and got back onto his winning ways. In 19 starts, Pitonzo put up 14 wins and five of which by shutout-- the most in his career thus far. However, the Nutz fell short in the playoffs, losing in the second round. However, with a new found confidence with his team, Pitonzo got back to work in the 2007-08 season. While his regular season wasn't the best (12 wins in 21 games with four shutouts), the playoffs showed Pitonzo's worth; backstopping the Nutz to the Bronze II Tier II Championship; his third in only six seasons of play.

Yet, in the off-season of 2008, due to a freak beach injury during a figure-four leg-lock (don't ask, though he picked up the win with the Sharpshooter) Pitonzo was only able to play in six games, winning four of them, before getting surgery on his knee; putting him out for the bulk of the 2008-09 season. The Nutz had plenty of injuries to coincide with Pitonzo's, which is why they were eliminated in the first round. Once Pitonzo was healthy for the 2009-10 season, the competition around the Nutz stepped up and really got them off their game. Pitonzo played 15 games in the 2009-10 season, going 2-11-2 with the Nutz only having five wins in the season and losing in the second round of the playoffs.

There's a lot of hope in the future for Pitonzo, who's career is just starting to take off. Who knows where it could lead.....probably still in adult league, but still. It worked out well with the FOHS anniversary and gave me a reason to give a rundown of a friend's career and a former teammate of mine.
Posted by ScottyWazz at 9:00 AM

I do have to say ... Marc's first "set" of goalie equipment consisted of softball catcher's leg pads, a softball catcher's chest protector, a big hockey glove (from the 80's), a leather goalie glove (ala Mike Liut), a hockey helmet, and a goalie stick. His equipment has certainly gotten better since then.

It's taken quite awhile, but I'm honored to be getting this recognition from one of the foremost authorities in absurd goaltending in the game today. I do not take this selection lightly, and I will be sure to continue trying to be as unorthodox as possible en route to my 4th championship in 8 seasons.