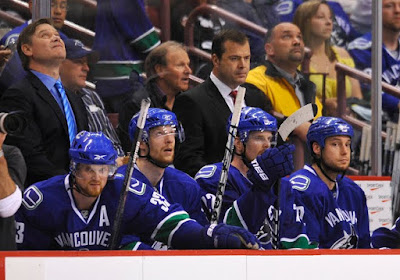 Exactly one year after the Chicago Blackhawks knocked the Vancouver Canucks out of the playoffs in Game Six; it happened again. Of course, this time; it happened in Vancouver rather than Chicago. But with all the high hopes the Canucks fateful had, with all the fire power it seemed to have this season with Henrik Sedin's breakout year-- the Canucks fell to injuries and power outages at the wrong time, which is why they're left wondering what happened.

Obviously, one of the main focuses will be the play of Roberto Luongo; who seemed to be disconnected in the playoffs. Luongo had a horrific 3.22 GAA and .893 save percentage in the playoffs and really didn't seem to be on his game. It could have the overuse thanks to the season, the Olympics, and then the playoffs-- but this could also put the tag of most overrated goalie in the NHL today. With nothing to show for his troubles, individual or otherwise in the NHL, it could spell trouble for Vancouver if they want to make the next step in the playoffs. The four years left on his contract could be troubling to those who have their doubts about Luongo. With him supposed to be the captain, it's up to Luongo to actually get up for the big games and motivate his teammates. With Cory Schneider waiting in the wings, it could be interesting how this off-season plays out for goaltending.

The loss of Willie Mitchell midway through the season really hurt the Canucks on the back-end. It remains to be seen how they'll work with him, but I wouldn't be surprised to see him back in the blue and green next season. One surprise was Christian Ehrhoff, who came into his own with a career-high in points. However, Ehrhoff has always been a streaky and inconsistent player season-to-season, so for him to repeat the feat will show he's actually ready to be in the race for solid defenseman status. Alex Edler also stepped up into a bigger role; while Sami Salo (who should get marks for bravery, but shouldn't have been in the Game Six line-up) had a drop-off in scoring, but a solid +16 for the year. Shane O'Brien will be a question in coming back, as his off-ice issues came into criticism, but his on-ice work was decent enough to get him a new contract.

Up-front, the core of the Sedins, Ryan Kesler, Alex Burrows, and Mikael Samuelsson will continue to be the go-to guys and should be keyed on more, especially with Henrik's breakout year and Daniel's solid production despite his broken foot. The turnover in Game Six could have spelled Pavol Demitra's end in Vancouver; but the guy passed it to him, Kyle Wellwood, could get a look at the Canucks after a decent playoffs, especially in the second round. Though Wellwood got a lot of heat throughout his career, his performance could garner some attention; as could his ability to eat the Old Country Buffet into bankruptcy (sorry folks, had to do that).

The big deal is how the extension of Alain Vigneault will play out, especially since he got a three-year extension in September. After his performance in the playoffs, who knows how much faith the main brass will have in him should he start to falter in the start of the season. How much leeway will AV have in terms of slipping up and what happens if he has a good regular season, but another short-run in the playoffs?? Next to Luongo, the criticism will be all on the coach-- as it always has been.

Another promising run with all the tools needed to make a Stanley Cup charge falls short for the Canucks. There's plenty of finger pointing, there's plenty of possible excuses for what went wrong, but the bottom line is they're out of it way too early. With much up in the air, the Canucks will have to do soul-searching and brainstorming in order to see what's going to work next year and get them over the hump of the second round.
Posted by ScottyWazz at 9:05 AM