Big Buff vs. Alex the Great 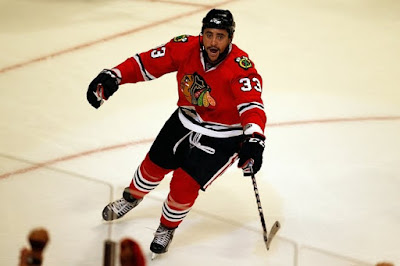 There's something about the playoffs that brings out the other side of players that may have been hidden or flown under the radar. John Druce back in 1990 for the Caps, Johan Hedberg in 2001 for the Penguins, and I think Dustin Byfuglien for the Blackhawks would be this year's candidate for breakout star. Yet, even so, there's something about him that's so very endearing that makes you think that he'll have a bit more staying power and longer than a 15-minute outburst than the previous two.

In fact, I would say that the excitement, tenacity, and all around love of the game could be on par with that of Alex Ovechkin.

Sure, it's a reach, I know-- but when you see how he celebrates his goals, how he'll go into any kind of situation to win the small battles, how he can bring energy to most every shift; it kind of mimics Ovechkin's play. Of course, Byfuglien is becoming more and more of a clutch player, which Ovechkin has been knocked for not being-- especially they year with the Olympics and playoffs. Yet, both are big body guys, both have a nose for the net, and both seem to be the folk-heroes in their respective cities. Not only that, but both guys get attention. Ovechkin get it from his skill and point totals; while Byfuglien gets it from the fact he can stir the pot and draw penalties, while not taking as many. He seems to be what Tomas Holmstrom was in the 90s for the Red Wings.

Yes, I know Byfuglien will never score as much as Ovechkin-- that's a given, but his spirit for the games, as well as his versatility to play forward or defense; makes him a valuable commodity and a great team guy for his teammates to feed off of and really get behind if they need a pick-me-up. If the Hawks can win the Cup this year, odds are you'll hear about how Byfuglien was a big reason for the victory. If it's not for his clutch goals, it'll be for stirring the pot and getting the other team off their games because of his antagonistic game-plan.
Posted by ScottyWazz at 5:30 PM