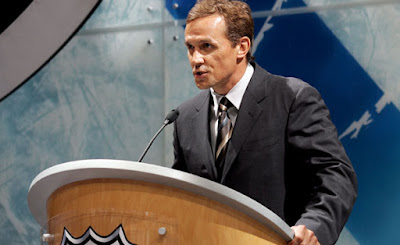 (FOHS fans will get that pun by me going with our first ever called asking if it's "Eye-zer-man" or "Is-ear-man"-- got it?? Okay, not so funny if you weren't there.)

The Tampa Bay Lightning take another step to relevancy by hiring Steve Yzerman as their new GM. Yzerman was under Ken Holland's tutelage in Detroit and has been the head guy with Hockey Canada putting together the 2010 Canadian Olympic Team and a couple World Championship teams, as well. Now, he takes over the mess that has been created in Tampa before him, but not by the GM prior, but due to the ownership situation that had happened.

The good thing with this team is that they have a solid framework. The likes of Vincent Lecavalier, Martin St. Louis, Steven Stamkos, and Victor Hedman on the roster help, but there's work to be done elsewhere, for sure.

One of the first things would be trying to get Stamkos re-signed to a long-term deal come July 1st and make sure that he's under contract for this team for a while. Stamkos will be the cornerstone moving forward, that's for sure. Of course, in order to do that, some players may need to be moved. The one name that pops up is always Lecavalier, but his No-Movement Clause ruins that rumor in it's tracks. Especially with the future ahead, it's unlikely Lecavalier will move that clause and move himself out. Even with Lecavalier slumping last season, it could be hard to move him even if he did waive that clause. St. Louis has another year left and Yzerman will probably see what he does with a second year alongside Stamkos to see if he's worth an extension. To free up the money, Ryan Malone could be moved out, so that his contract is off the books; but considering his underachievement for his big contract-- another hard sell.

Plus, what could Yzerman do with the coaching issue. Many names have been mentioned in terms of the people he's worked closely to like Dave Lewis and Ken Hitchcock, but while familiarity could be nice-- the fit with the team will be what gets them to the next level. Depending on how long Yzerman has known about this deal, which he has been offered numerous times before saying yes, he could have been scouting out who he could get for that role.

Regardless of what happens, Yzerman is a good hockey mind. He has always been know as a leader on and off the ice, which definitely shows in his limited time in the front office after his 2006 retirement. If there's anyone who can clean up the mess that is in Tampa, it's Yzerman. He's definitely a better choice than some of the names put out there-- like Pierre McGuire, Doug Risebrough, or Dave Nonis-- and really could bring together the best team to get them out of the lurch they have been in. The fans in Tampa should be excited about this move, and coupled with the Florida Panthers hiring of Dale Tallon, the Southeast Division could actually be competitive through and through in the next couple of seasons if they play their cards right.
Posted by ScottyWazz at 12:45 PM

I appreciated the pun. Before you leave, we should have someone call into the show from the kitchen too.