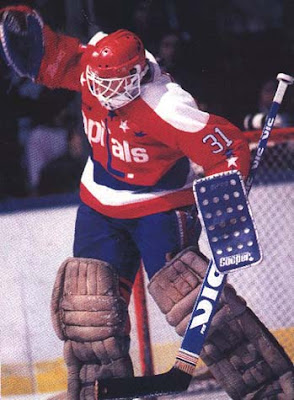 There's not much else to say about why this week's was chosen for the AGM. However, I do remember back in the day, I did have the buttons of both Capitals goalie that the booster club was giving out. One was Don Beaupre and the other was this week's inductee, who has plenty of success as a 1b or back-up and then in the minors-- but he'll be remembered mostly for being the goalie who was the loser in one of the longest overtime playoff games ever. This week, we give to you-- Bob Mason.

Mason started off his career path with the University of Minnesota-Duluth Bulldogs in the 1981-82 season, where he overtook the starting role over Jon Downing and played 26 games 9-15-3 for his freshman year, but got a bigger role in his sophomore year, where he came into his own. Mason played 43 games games going 26-16-1 with a 3.49 GAA . Mason was able to get the Bulldogs into the NCAA tournament, but couldn't get out of the first round. His season was able to get Mason WCHA MVP and First-Team All-Star honors for his year.

Mason got noticed by the United States National Team, who was preparing for the 1984 Olympics. Since the team had to be full of amateurs, Mason couldn't sign on with anyone and leave school to take the position. Mason took the call and played on the National Team for the 1983-84 season, going 17-10-5 with a 2.82 GAA in 33 games. In Saravejo, Mason backed-up Mark Behrend and played three games and went 1-0-1. After his strong college and international performance, Mason got signed as a free agent in late February of 1984 by the Washington Capitals. Mason played two games for the Capitals at the end of the season going 2-0-0, then was sent to the AHL's Hershey Bears going 1-4-0 in five games.

At the start of the 1984-85 season, Mason started off with the Binghamton Whalers of the AHL, but got a solid call-up in November of 1984 for the Capitals. Mason won eight game straight during his call-up and 8-2-1 with a 2.81 GAA for the season. With the Whalers, Mason went 10-6-1 in 20 games. The 1985-86 season saw Mason back in Binghamton, as the Capitals had too many contracted goalies on the big club. With the Whalers, Mason went 20-11-2. Mason went up to the Caps for one game and got a win in replacing Al Jensen. Mason finally got the call up to the big club for the 1986-87 season, though he spent two more games in Binghamton, going 1-1-0. When he got the call-up to Washington, he had to battle former AGM Pete Peeters for playing time; but Mason was able to get a majority of the starts when all was said and done, playing 45 games and going 20-18-5 with a 3.24 GAA.

However, Mason's shining moment with the Capitals came during the first round of the 1987 NHL Playoffs. The Capitals took on the Islanders and Mason was put to the back-up role for Peeters. After Game Two, Mason was the guy who got the call for the Caps, as he won Games Three and Four and replaced Peeters in Game Five. The Caps lost Game Six, which set up one of the most epic Game Sevens the Playoffs. The game started on April 18th and didn't end until Easter Sunday on the 19th. The game saw many chances in overtime, 132 shots total by the teams, which resulted in Pat LaFontaine scoring on Mason to end it deep into the fourth overtime. Mason stopped 54 shots and went through 10 bottles of water throughout the course of the game. The Easter Epic will forever live in Caps fans minds as a testament to their snake bitten history. (YouTube Highlight Pack)

It would be Mason's last game for the Caps (for now), as he signed on as a free agent with the Chicago Blackhawks. Mason would battle for time with last week's AGM Darren Pang for time, which helped when they came out with almost a split. It saw Mason go 13-18-8 for the 1987-88 season. It was short timing in Chicago, as the Hawks traded Mason to the Quebec Nordiques for Mike Eagles. Mason would spent the first part of the season in Quebec, going 5-14-1 (that includes on loss at the end of the year) and would be sent to the Halifax Citadels in the AHL because of his poor play and being pushed out by another former AGM Mario Gosselin and Ron Tugnutt. With Halifax, Mason got better with a 11-7-1 record.

Mason was traded back to where it all started for him in the summer of 1989, as the Nordiques sent him to Washington for future considerations. Mason book ended the 1989-90 season with stints with the Baltimore Skipjacks of the AHL, but had a stint in the middle of the season with the Caps, going 4-9-1 in 16 games, but went 8-2-2 in 13 games with the Jacks.

The 1990-91 season was rough, as Mason was a free agent without a team. He would keep training until the Vancouver Canucks signed him as an insurance policy in December of 1990. Mason would go to the IHL and the Milwaukee Admirals. With Milwaukee, Mason went 8-12-1 in 22 games, but got a short stint with Vancouver, going 2-4-0 in his six games with the Canucks.

Mason stayed with the Admirals for the 1991-92 season, getting the starting time over Troy Gamble and Corrie D'Alessio. Mason played 51 games and went 27-18-4, but only 1-2 in the playoffs. The Canucks moved their affiliate to the AHL and the Hamilton area. Mason continued to get starters time, but this time had to fight off the youngsters like Gamble, Mike Fountain, and Jason Fitzsimmons. Mason would see 44 games with a respectable 20-19-3 record, but saw no playoff time.

With his contract up, Mason returned to Milwaukee for the 1993-94 season, as he would team with with Larry Dyck for the Admirals tandem, seeing each of them get equal time. Mason had 40 games under his belt with 21-9-8 record for his troubles. Mason would spend 13 more games with the Admirals, going 7-4-1 after going 0-1-0 with the Fort Wayne Komets to start the 1994-95 campaign. It would be the last Mason would play hockey.

Nowadays, Mason has gotten into the coaching aspect of things. He started off with the Atlanta Thrashers in their first two years of existence, but has since moved onto the Minnesota Wild, helping the likes of Niklas Backstrom and Josh Harding ply their craft and deal with the barrage of shots they are facing. He also mentors young goalies during the summer camps he holds along with Islanders goalie Dwayne Roloson.

While the lasting mark of Mason will be the four overtime epic in 1987, he also will be seen as another story of logjams getting in the way of his playing prowess. While his minor league records show he had potential, and while he had some success in the NHL; he couldn't keep the NHL success constant, which really was his demise. Though, that seems to the case for most of the AGMs; lack of consistency really ruining promising careers.
Posted by ScottyWazz at 8:15 AM