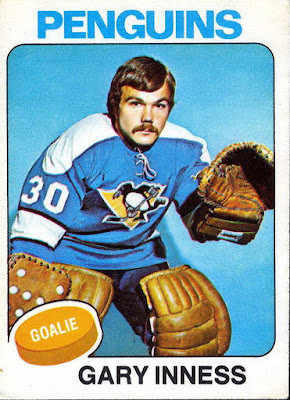 This past week, the Philadelphia Flyers followed in the footsteps of the 1942 Toronto Maple Leafs and the 1975 New York Islanders by coming back from being down three games to none to take the seven-game series. This week, we take a look at the last goalie to blow the 3-0 series lead and put himself in the record book in the wrong fashion. This week, we take a look at Gary Inness.

Inness's story within itself is interesting from where he came from. After playing his Junior B career with the Weston Dodgers, Inness went to college at McMaster University in Hamilton, Ontario, as he had goals to become a teachers. Inness played for the college team there and also played for the University of Toronto when he transferred there for the 1972-73 season. During his time at McMaster, Pittsburgh Penguins scout Rudy Migay found out about Inness and asked him to come to a training camp. After Inness finished his degree in Physical Education and History, he signed with the Penguins.

While they made short work of the St. Louis Blues, winning two games to none in the first round best-of-three series, the Penguins steamrolled the first three games against the New York Islanders. The Islanders switched goalies from Billy Smith to Chico Resch, which seemed to throw off the Pens. After Inness got 14 goals of support in the first three games, he only got four goals of support in the last four games.

For the 1975-76 season, Inness's time was reduced from 57 games the previous season to 23, as the Penguins were going bankrupt for the first time in team history. In Pittsburgh, Inness went 8-9-2, while he went 0-2-0 in Hershey when he was sent down. As the new ownership came in, they made a big change in the roster, as they sent Inness and future considerations to the Philadelphia Flyers for Bobby Taylor and Ed Van Impe. Inness would go 2-0-0 for his two games with the Flyers to close out the 1975-76 season.

The issue with the Flyers is that they had Bernie Parent and Wayne Stephenson in net, which relegated Inness to the third string role. Inness was the goalie of record for only three of the six games he appeared in during the 1976-77 season with the Flyers, going 1-0-2.

With playing time being rare with the Flyers, Inness moved to the rival WHA and the Indianapolis Racers. The 1977-78 season saw Inness put into the starting role with 52 games under his belt, but didn't get much support; which showed in his 14-30-4 record with a 4.21 GAA and .870 save percentage. It was a short tenure for the Racers in the 1978-79 season, as they folded up mid-season, with Inness going 3-6-0 in his 11 games.

Inness was able to catch on back in the NHL with the Washington Capitals, signing as a free agent. Inness had a solid impact with the Caps from the start, going 14-14-8 in his 36 games with a 3.70 GAA. However, the Caps would acquire Wayne Stephenson prior to the 1979-80 season, which push Inness out of the frequent role again. Inness would play 14 games and go a dismal 2-9-2 with a 3.63 GAA. Yet, in the same 1979-80 season; Inness would play a vital role with the Hershey Bears. Inness played only 11 games (4-4-3) in the regular season with the Bears, but split the playoff starting gig with Dave Parro. In the playoffs, Inness went 7-1 and help the Bears win the Calder Cup as AHL Champs.

The 1980-81 season saw Inness get very little time in either Washington or Hershey. With Washington, Inness played only three games, going 0-1-2 and playing only 10 games in Hershey with a 4-2-2 record. After the season was done, Inness would retire from playing hockey.

Inness wasn't away from hockey at all, as the Hershey Bears gave him the head coaching job after Bryan Murray moved to the Washington Capitals for a new gig. Inness coached three full seasons, going a total of 104-115-11, only making the playoff twice in those years and not making it past the first round of the playoffs. Inness was replaced in the 1984-85 season. After hockey, Inness went to work in his other love, teaching-- which he is currently doing at a secondary school in Barrie, Ontario.

While Inness is one of the few to make the NHL after playing Canadian College hockey, it shows that talent can come from anywhere, you just have to seek it out. While his record may not tell the tale, he did have a decent career-- even if he is a foot-note in history for the wrong reason. Also, it shows how his dedication to schooling was, as he made sure to finish school before moving to the NHL. It's an AGM with a moral-- stay in school and go where the work is.
Posted by ScottyWazz at 8:15 AM