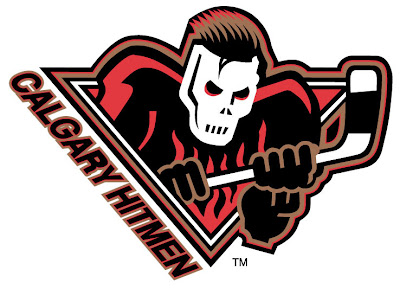 The Memorial Cup, which crowns the best in major junior hockey, starts on May 14th and as a (dis)service to you folks out there; I'll do my best to breakdown the teams you may or may not know. As a note-- I'm a hack and probably won't get all the facts or anything like that straight, so bear with me.

It was 11 years to the day after their last WHL championship, the Calgary Hitmen hope their trip to the Memorial Cup this year ends up much better than their trip back in 1999, where they came up one goal short of the Memorial Cup. This year's team was determined after their WHL Finals loss last year to the Kelowna Rockets and got over that hump by winning it this year. Now, with the top goalie and top scorer from the WHL's regular season and playoffs on their side, the Hitmen now set their eyes on the ultimate prize in Major Junior hockey.

Starting in net, Martin Jones (Los Angeles, free agent) has been nothing short of stellar for the Hitmen this season and playoffs. Crowned with the Goaltender of the Year and Playoff MVP honors, Jones is the main cog in the Hitmen's success. With a calm demeanor, Jones won't get rattle easily from the offense. Luckily for him, his team often gives him an early lead. The only issue is what his team in front of him will do if they get down early. Much like other goalies, Jones can only do so much before support needs to come into play. However, if Jones does falter; it could spell a demise for the Hitmen's hopes.

In front of Jones, the Hitmen have a very potent offense; headlined by WHL top scorer in the playoffs (8g, 22a) and regular season (32g, 75a), Brandon Kozun (Los Angeles, '09). Kozun is at a distinct size disadvantage, but his speed and smooth skating will what makes up for his size. The size is brought by Joel Broda (Washington, '08), who lead the playoffs in goals with 13. Broda has a quick release and laser-like shot. While he's not too much for speed, if he gets room-- he's deadly. The surprise for the playoffs is Mischa Fisenko (UFA), who put up 8 goals and 11 assists for the playoffs; which wasn't too much off his pace from the regular season where he has 12 goals and 32 assists. Late-season pick up Tyler Shattock (St. Louis, '09) and role guys Cody Sylvester (Eligible 2010) and Kris Foucault (Minnesota, '09) have also chipped-in here and there. The biggest intangible is the block-party the Hitmen have when they're on the defensive, as this is a team who isn't afraid to get in the way of pucks.

Defensively, the Hitmen are just as good in their own zone as they are in the offensive zone. Leading with Eastern Conference Defenseman of the Year, Michael Stone (Phoenix, '08)-- the Hitmen have a lot of guys who contribute offensively as they do defensively. One guy who has come into his own has been Giffen Nyren (UFA), who came over from Kamloops during the year and was able to find his game while with the Hitmen. Youngster Ben Wilson (Eligible 2010) and Matt MacKenzie (Eligible 2010) have come into their own this year and most importantly, these playoffs.

Coach Mike Williamson had a chance with both teams in the WHL Finals and may or may not have been the cog to push the Hitmen ahead, but the players have bought into the system. GM Kelly Kisio built a team around last year's team with not many drastic changes, which kept the team chemistry there. They also have a nice blend of experience and youth for their team to keep building for years to come. It has been a while since their last trip, but the structure is still the same for these Hitmen as it was in 1999. It's been 15 years since the Hitmen came to be in the CHL landscape and they hope that the end of their 15th year will have a Memorial Cup to make it even more memorable.
Posted by ScottyWazz at 12:20 PM