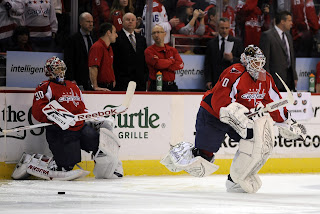 It wouldn't be a summer without a controversy with the Washington Capitals and their goaltending. This time, it could have been preventative and maybe it's just the inability for the one party to curve how they really feel....but they are screwed because they are cursed for not having a true personality and then when they slip-up, they are condemned for it.

In any case, Michal Neuvirth gave an interview to a Czech website in regards to this coming season and there's many interesting points, mostly about Braden Holtby being his "weakest competition yet" and him advising Tomas Vokoun to go to Pittsburgh rather than Russia. You can check out the rest of the stuff thanks to the folks at Russian Machine Never Breaks who have a great translation of it.

While many people believe this is Neuvirth's mouth writing a cheque his play can't cash, especially against Holtby, he could have a point and maybe the style of hockey that has been played-- as the lovely and talented Greg Wyshynski points out-- could have helped out Holtby's stat-line. Granted, Holtby does have a regular season record of 14-4-3, this could also be chalked up to the fact that the NHL level players hadn't figured him out. His time with the Hershey Bears last season was a decline of the 2010-11 season, but it could also be due to the jet-lag he had because of shuttling from AHL to NHL. Even so, it seems that he can get figured out if players and coaches have enough game-tape of him.

Neuvirth small nagging injuries have plagued Neuvirth for the past two seasons, mostly lower-body injuries, but it makes you wonder if he would be able to actually go a full season without actually missing any time on the IR. Personally, that alone would make me wonder about his spot as the starting role, as well as his decline over the past couple of seasons-- which could be chalked up to the injuries or what Holtby will discover in a stat-line decline because of players figuring his style out.

However, I think this is something that I wonder if the Capitals are slowly creeping up to the Philadelphia Flyers range when it comes to goaltending. Since Olaf Kolzig unceremoniously left-- Neuvirth, Holtby, Vokoun, Jose Theodore, and Semyon Varlamov, have tried their hand in net, leaving coaches and fans wondering why they're in there over another.

At the end of the day, you have to wonder what's going to happen with this and whether or not stability can be found in either of these two for the long-term with the Caps. Especially with Philipp Grubauer coming up through the ranks-- they could get even more pressure. Yet, with the goalies bickering amongst themselves, it could be an issue when the season starts and the attention put forth could be unneeded pressure on Neuvirth when he didn't need to actually go that way when questioned.

For Neuvirth's sake, I hope that he's healthy enough to actually perform the way he thinks he can-- because it could be a huge bonus for the Caps. Though, if he can't-- the heat he may/will get over his comments will be immense. More over-- this has to be bulletin board material for Holtby, motivating him to be better than before to show how "weak" he can be.
Posted by ScottyWazz at 8:49 AM