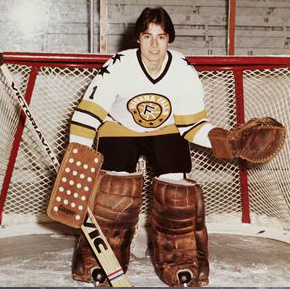 While this week's AGM's heart was in his hometown of Niagara Falls, Ontario, Canada-- he took a lot of things on the road with him to remind him of home-- even if it was indirectly. Through it all, he struggled to keep his spot in the organization; he knew he had something to go home to and take more pride in his home, trying to show it off to the world of hockey somehow. This week-- the profile of Nick Ricci

Ricci started his trek during the 1976-77 season with the Junior "B" Toronto Red Wings, while also spending seven games with the OHL's Niagara Falls Flyers-- Ricci's hometown team. The 1977-78 season, Ricci spent all of it with the Junior "B" Red Wings, while playing 52 games with Niagara Falls in the 1978-79 season, then taking them to the OHL Finals, but losing on points to the Peterborough Petes. Ricci would win the 1979 Dave Pinkney Award with Glen Ernst for lowest team GAA, as well as the F.W. Dinty Moore Award for lowest rookie GAA.

One of the interesting things about Ricci is that he would always carry around a gallon of Niagara Falls distilled water jugs. While he used it to soak his contacts in, many of his teammates thought it was because he couldn't be too far away from his hometown at any time.

The Pittsburgh Penguins would draft Ricci in the 5th round of the 1979 Draft and would play four games with the parent club, going 2-2-0; using his acrobatics to earn himself playing time behind a bad defensive team . Most of the 1979-80 season would be spent in the IHL with the Grand Rapids Owls for 29 games and a 4.28 GAA.The 1980-81 season saw Ricci with the Penguins for nine games and post a 4-5-0 record, while he would move to the AHL's Binghamton Whalers for eight games and finishing with a 2-4-0 record.

The bulk of the 1981-82 season, Ricci found his footing with the AHL's Erie Blades, playing for 40 games that season and compiling a 16-19-4 record; getting called up to Pittsburgh for three games-- all losses. For the 1982-83 season, Ricci went to the AHL's Baltimore Skipjacks for nine games and put up a 3-3-2 record, while getting a call-up to Pittsburgh to have a 1-2-0 record in his three games.

In August 1983, Ricci and Pat Graham were traded to the Toronto Maple Leafs for Vincent Tremblay and Rocky Saganiuk. The 1983-84 season had Ricci split between the AHL's Newmarket Saints for 15 games, mostly in relief with a 3-4-1 record; then spending the other half of the season with the IHL's Muskegon Mohawks where he would go 1-11-1 in 13 games.

The 1984-85 season would be Ricci's last, as he played for the IHL's Peoria Rivermen and post a 4-3-0 record in seven appearances; then he would hang-up the pads after that season.

Post-playing career, Ricci would help out with the family business-- taking ownership over the Hotel Fallsview in Niagara Falls, Ontario. Ricci sold the hotel in 2000. In June 2002, Ricci purchased the Mississiauga Ice Dogs from Don Cherry, selling the team to Chris Pronger and Mario Forgione in February 2003; less than a year after buying it. Ricci then was the head of trying to bring an OHL team back to Niagara Falls, with no results thus far. Currently, Ricci has his own goaltending consulting firm, Goalies Only Consulting.

Ricci had very little time to show off what he could truly do and bounced around a lot-- but he at least remembered where his home was and seemed to take pride in that fact and take part of it with him-- even if it was just for his eyes. Though his NHL career was only 19 games long, he left an impression as being indirectly part of getting the Pens Mario Lemieux by getting the Tremblay.
Posted by ScottyWazz at 8:00 AM