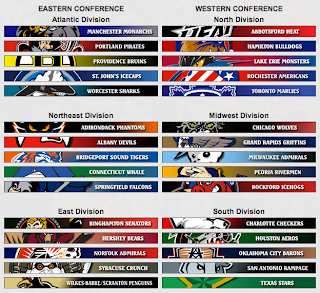 With the impending lockout doom-- DOOOOOOOM-- it's probably for the best that the actual NHL fans actually get acquainted with some other leagues out there. Yes, that's right, folks-- there's other hockey leagues out there besides the NHL. Crazy, I know. So, here we go.

The AHL is the direct feeder system when it comes to the NHL and you'll see a lot of fans actually paying close attention to their AHL teams to see who is ready coming up through the pipeline of the team. Because of that, and a by-law, I believe; there are 30 teams-- one for each NHL team. They span from Newfoundland to British Columbia in Canada and in 16 States. Because of that 12 of the 30 AHL teams are owned by their parent clubs.

One of those teams that are independent is also the longest standing team in the AHL-- the Hershey Bears, who are now the affiliate of the Washington Capitals. They have the most Calder Cup championships with 11; the last coming in 2010. It should be noted that the Connecticut Whale have the longest lineage dating back to the Providence Reds in the 1936-37 season-- the first year of the AHL, but the Bears have stayed in the same town with the same name since 1938.

For the most part, the AHL was a predominantly Northeast region of the US league with spattering of Quebec and Ontario thrown in. However, with the "absorption" of six IHL teams and some ECHL moving upward into the AHL game; the league has expansion into the Midwest, Texas, and Western Canada. How west?? The Abbotsford Heat are the furthest team west and the closest team to them is the Oklahoma City Barons which is 2,100 miles away, while the Heat are 4,378 miles away from the St. John's IceCaps, the furthest team East.

There's not much else to be said about the nuances when it comes to the AHL. It's a talented league where you can see a lot of the good young prospects who couldn't get the fast-track to the AHL with some of the career AHLers who may have never gotten the chance. The pace of the game is almost on par with the NHL product and it's something where you could actually enjoy the entertainment value, as well as the hockey, for a solid price at the box office.

Should there be a lockout, you'll probably see a lot of the younger NHLers to be sent to the AHL to make sure they keep playing-- thus it would be a great idea to see a better talent on the ice. Even if there isn't a lockout and you have an AHL team in your area-- even if it's not the same as your parent club-- check it out to experience just one game of the next highest league in the North American hockey pipeline.
Posted by ScottyWazz at 3:32 PM