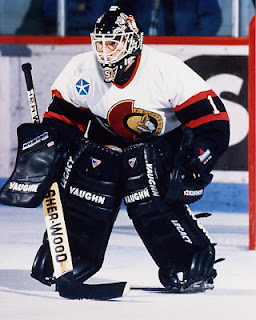 This week's AGM isn't one you would think of because....well it was a career marred in downside rather than upside. It wasn't until he was on another continent for him to reach a top potential. While his North American career started bad and had a few bright spots-- after he left the strain of the NHL hopes, he was able to actually show his true worth. This week, the profile of Mike Bales.

Bales started off his career with the Saskatchewan Junior League's Estevan Bruins, playing in 44 games with a 4.90 GAA; but it was good enough to get him onto The Ohio State University Buckeyes starting in the 1989-90 season where he would go 6-13-2 in 21 games. The Boston Bruins selected Bales in the fifth round, but Bales stayed with the Buckeyes for the 1990-91 season, posting an 11-24-3 record, then in the 1991-92 season; Bales put up an 11-20-5 record for the Buckeyes, leaving school after that season.

In the 1992-93 season, Bales went pro and would play mostly for the AHL's Providence Bruins as he would put together a 22-17-0 record; then going 0-2 in the playoffs, while also playing in a game for the Bruins in relief of John Blue, but did not factor in the decision. Bales stayed in Providence for the 1993-94 season, but have a dismal season with a 9-15-4 record.

Bales signed on with the Ottawa Senators in the summer of 1994 and he would be placed with the PEI Senators for most of the 1994-95 season, posting a 25-16-3 record, as well as a 6-3 playoff record, though they would lose in the division semi-finals. Bales also appeared in a relief appearance for Ottawa that season-- not a factor for the win or loss. The 1995-96 season had Bales in the carousel for the Ottawa Senators goaltending, playing 20 games while going 2-14-1 while facing a barrage of shots-against. In PEI that season, Bales lost both games he appeared in. For the 1996-97 season, Bales was in the AHL, but for the Baltimore Bandits finishing the year with a 13-21-8 record in 47 games, while losing the only game he appeared in with Ottawa.

The Buffalo Sabres signed Bales for the 1997-98 season, but would put him in the AHL for the Rochester Americans where Bales would play in 39 games and go 13-19-5 record.

With no chances in North America, Bales moved to Great Britain for the 2001-02 season with the Belfast Giants in the British Elite League, playing in 34 games, posting a 2.31 GAA, and winning Best Goaltender Award, as well as making the First Team All-Stars.

Bales would move over to Germany for the 2002-03 season for ERC Ingolstadt, playing in 23 games there, while moving to Sweden in the 2003-04 season to play with Leksands IF for another 23 games.

With the 2004-05 season, Bales went back to Germany and went to the second division Straubing Tigers where he would help them get a promotion into the Germae Elite League for the 2006-07 as Straubing won the promotion in the 2006 playoffs. Bales would leave Straubing in 2010 after playing in 250 games over six seasons. While Bales was signed by the Iserlohn Roosters for the 2010-11 season, it was only on an emergency basis and he never went over, thus ending his career.

The Pittsburgh Penguins would sign Bales to be the goaltender development coach for their AHL, ECHL, and other prospects down their pipeline. The 2012-13 season will be his second with the team.

It wasn't the most glamorous career and had many more potholes in the road rather than smooth sailing. It wasn't until he went overseas did he get his most success when he had matured more and didn't have the pressure of worrying of the shuttling back and forth from the minors to the top teams. Yet, he helped one franchise in Germany get promoted and make a name for himself enough to be a developmental coach.
Posted by ScottyWazz at 8:00 AM