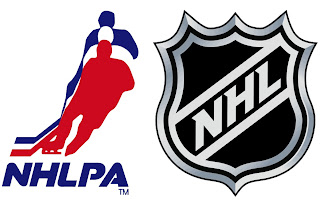 While the "impending doom" of the end of the CBA comes to term, the ideal of Gary Bettman as the bad guy has reared it's ugly head. Sure, the figurehead for the owners will get the brunt of the heat-- something he has been able to take in stride; him mentioned the fact the owners won't go past the expiration date IS NOT NEWS, because he has said it in the past. There's some probable reasons why he wouldn't do that:


Even with common sense being around, the hyperbole amongst many fans is running rampant-- especially with Donald Fehr playing the nice guy act saying the players would play past the expiration. Of course they would-- they'd still be making money. From people getting upset about Bettman about his comments, sports columnist painting the doom-and-gloom scenarios that riles up the troops, and then people saying that "the game as we know it will never be the same"-- it's hard to be a fan or actual reasonable human being during these times.

First and foremost-- THERE IS OTHER HOCKEY OUTSIDE OF THE NHL!! I can't stress this enough people. Sure, the void will be vast with the NHL not around and that's a crying shame for the global scale of the game-- but there's plenty of other hockey out there that would enjoy your entertainment dollar at a small price. Sure, it's not the NHL hockey you're accustomed to, but at the same time-- it could be good for people to diversify themselves into the minor league or junior levels of play. When the NHL does comeback, the future stars would have already been seen by others. Hell, support your local minor hockey team even if there isn't an extended lockout or a lockout at all.

Second, the rage against Bettman is silly, but understood. He's the NHL owner's speaker. While he has the commissioner title, the fact remains that his powers beyond what the owners give him is very limited. Bettman is at their beckon call and if he doesn't do what the owners want-- they will get someone who will-- which could be even worse than Bettman.

Third, you have to love the likes of David Shoalts and the others who are already cancelling the season until the Winter Classic. Sure, that's a possibilty, but there's also a possibility that the season only gets delayed a day, a week, a month, whatever. The feeding of the already upset fan bases is something where they can feed off of for page views and recognition. While in some way, shape, or form we are all gloryhogs, but at the same time-- there's also a limit to it all.

Fourth, just because the NHL is planning lockout, the fact that people are worried that games in September could be cancelled makes me snicker a bit. Sure, pre-season games are fun-- especially those in neutral locations like Baltimore, Brooklyn, Kansas City, and Vegas-- but the loss of them doesn't mean as much as many would like you to believe. As much as I would like to see some AHLers battle out for a spot on the roster or see star players just go through their motions-- cutting out the pre-season games all together probably isn't the worst thing for the players in terms that they won't have that added risk of injury during meaningless games.

Donald Fehr said there's still significant time (though that's before the "meaningful gulf" comment) to get a deal done. Bill "Don't call me Steve Wilkos" Daly has said that in the past, as well. Some players aren't panicking at all of a lockout, while others are making contingency plans-- just in case. The fact the NHLPA hasn't put forth a counter-proposal yet is reason to believe that this process is going to be a tactical one and something that could bring about good things. Both sides have met more and had seemingly more meaningful conversations than that of the last labor meetings that started in the summer of 2004 should be a good sign.....but you can't put that forth through all the hyperbole being flung around by emotional fans.

Should the NHLPA's proposal (rumored to be put forth Tuesday) be something that causes both sides to not talk for a couple weeks, then we should have a problem. However, with the extreme case the NHL put together and the NHLPA still meeting with the NHL for a couple days a week after that could mean that they are serious about getting something done in time. Outside of fans, the livelihood of both sides (read: money) is something that is of significant loss and that neither side wants.

In the end, we're still 36 days away from a possible lockout and the true test will come with the NHLPA's counter-proposal and what that does to the owners. Even then, we'll be close to a month away from a lockout-- still a lot of time to go and bargain. While there hasn't been much going on this summer, the fact that every fan out there is turning into a pessimist all the sudden is somewhat expected and somewhat disappointing. Cooler heads will prevail in the end....but if it's before, slightly after, or really after the deadline remains to be seen.
Posted by ScottyWazz at 7:00 AM