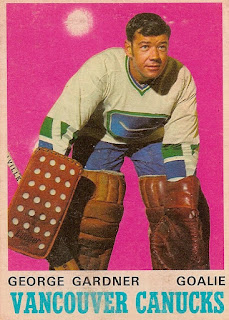 Back in the time where the goalie spot was one that was few and far between, goalies would go at great length to keep their jobs. This week's AGM actually needed corrective glasses for his vision, but didn't tell anyone because he thought he would be cut. He would memorized the eye-charts to pass the exam, but it was until late into his career that he got caught when the team switched the chart on him. This week, the profile of George Gardner.

Garnder started his career with the Quebec League's Victoriaville Bruins in the 1961-62 season, posting a 28-19-2 record, then going 7-3 in 10 playoff games. The 1962-63 season, Gardner moved to the OHA (now OHL) to play with the Niagara Fall Flyers, helping lead them to the George Richardson Memorial Trophy for Eastern Canada Champions, but losing in the Memorial Cup in six games to the Edmonton Oil Kings.

The Boston Bruins claimed Gardner from Kingston EPHL during an Inter-League Draft before the 1963-64 season and sent him to the Minneapolis Bruins of the CPHL for that season, where he would put up a 30-27-6 record in 63 games.

Gardner was then claimed by the Detroit Red Wings before the 1964-65 season during another Inter-League Draft and the Red Wings put him in the CPHL with the Memphis Wings, putting together a 25-32-9 record that season. The Red Wings promoted Gardner to the AHL's Pittsburgh Hornets for the 1965-66 season, where he would compile a 34-30-1 record, while also appearing in his first NHL game for an injured Roger Crozier, which he would win.

It was a hectic 1966-67 season for Gardner who bounced betwen Memphis (4-9-3), Pittsburgh (18-6-4), and Detroit (3-6-0), but the most interesting part that season was his living arrangements in Memphis. Instead of getting an apartment, Garder was renting a place for $40 a month. This play was a mansion that was owned by a former teammate's mother which had a maid, butler, and chauffeur; who drove Gardner to the rink in a limo.

The glamorous life didn't follow Gardner in the 1967-68 season, where he would play in the CPHL with the Fort Worth Wings, playing in 12 games with a 4-7-0 record and then going to Detroit to play 12 games for the Red Wings and finish with a 3-2-2 record.

Gardner was picked up by the Rochester Americans in the Inter-League Draft, but would have his rights transferred to the WHL Vancouver Canucks, where he would go 25-18-9 in the 1968-69 season, helping the Canucks in the championship. Gardner would stay for the 1969-70 season and have an amazing 41-14-6 record, helping the Canucks win a second straight championship, as well as winning the Leading Goaltender Award for lowest GAA in the season.

The Canucks would be moved to the NHL the next season in an expansion role. Gardner would be the starting goalie for the Canucks' first game in the NHL, a loss to the Los Angeles Kings. Garder would play 18 games for the Canucks that 1970-71 season with a 6-8-1 record. Gardner would also play in the AHL for the Rochester Americans for four games with a 0-1-3 record. In the 1971-72 season, Gardner would stay with the Canucks and play in 24 games and finish with a 3-14-3 record.

Gardner moved to the WHA and the Los Angeles Sharks for the 1972-73 season, finishing with a 19-22-4 record in 49 games. Playing only two games for the Sharks in the 1973-74 season (both losses), Gardner would be traded to the Vancouver Blazers, playing in 28 games with a 4-21-1 record. Gardner was moved south the play in the Southern Hockey League with the Roanoke Valley Rebels for four games before retiring.

Gardner passed away in November of 2006 in his home in Florida.

From living the high life in Memphis to faking eye exams to being the first goalie in history for a new team Gardner experienced the up and down of hockey and showed how hard it was to keep a spot in the old days and he had to do what he needed to keep his spot and keep going.
Posted by ScottyWazz at 8:00 AM