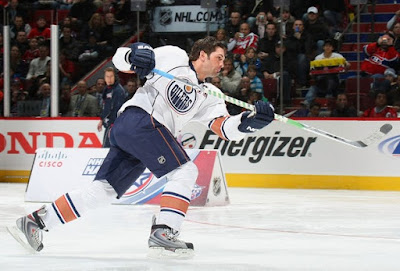 As you know by now, the Edmonton Oilers assigned troubled defenseman Sheldon Souray to the Hershey Bears of the AHL, the affiliate of the Washington Capitals. The Capitals shipped their troubled player by the name of Michael Nylander to the Flordia Panthers AHL affiliate Rochester Americans a couple weeks ago. This could be karma for those crazy Caps....or something.

In any case, the thought of Souray in the AHL is a little bit of an interesting scenario. While we all know of his public blow-up against the Edmonton Oilers, is there going to be a backlash if he doesn't think he's properly used in Hershey?? Is there going to be a case where he poisons another franchise's youth with his tales of mistrust and telling the kids to maybe be on their guard when dealing with front office people?? While I doubt that'll happen, the fact is that he's going to be in a better place than he would be in Edmonton.

Even so, the addition of Souray is going to create less time for some of the younger guys in the Bears line-up to grow and develop and all that fun stuff. That could create some kind of tension, especially if he's there for an extended amount of time-- which could be a good possibility considering the fact that his contract is a good amount against the salary cap. But, if that creates a logjam on the blue line in Hershey, when do the Caps say that's enough and convince the Oilers to take him back??

But, since Souray is going to the land of Chocolate, here's some possible tips for Souray on his adventures in the AHL, the first time since 1998:

-DO enjoy the time in the small community of Hershey and enjoy the relax style they have there.

-DON'T say that you're richer than the chocolate while driving around the tram at the Hershey's Chocolate Plant tour.

-DO decide to venture around the area. There's Harrisburg, the capital of Pennsylvania; while Washington, DC and Baltimore are only a couple hours away. Plus, York is the home of the barbell.....so that's something.

-If you do go to Baltimore-- DON'T mock and talk bad about people on Edmondson Avenue. While it may sound like Edmonton, there's very high odds you could get shot.

-DO play like you want to get back into the NHL and DO show you're a team player.

-DON'T run down Reese's Cups because then you'll be hated throughout the world.

Alright-- so that's that. Now, we get to see what happens with Souray and how he's able to cope with being sent down. Obviously, he's taken his lumps and has a lot to prove to be in the good graces of the NHL executives to take a flier on him-- but Hershey could be the best place to put him-- being TWO-TIME, TWO-TIME defending Calder Cup champions.
Posted by ScottyWazz at 2:20 PM

I'll be in Hersey for the games vs Hartford and Worceter. Souray?! I hope he's still there. Epic on so many levels... We can go to Michael Buble together. And go taunt Olli Jokinen together. He'll seem less greasy on the east coast.

Chick, if you're there for a Souray vs. Redden match-up; you must document that and maybe write a book called "What Went Wrong: The Story of Washed Up Offensive Defensemen."

And once that goes top seller I'll publish the followup "What Went Right: The Story of Washed Up Offensive Defensemen." It will be a leaflet "This Page Intentionally Left Blank."

Then you can do a third book, "Jared Cowen's Turnovers, A Tasty Dish." Follow-up by creating that into a movie with James Franco.