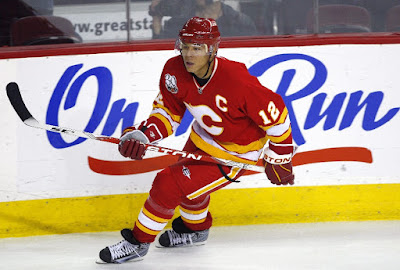 There has been a lot of heat on the Calgary Flames (pardon the pun) when it comes to them losing leads recently. Considering the fact they're 11 games into the season and already have had two closed door team meetings; it almost seems like this is a team divided amongst itself. The main focus on this team is definitely Jarome Iginla, many wondering if he would waive his no-movement clause to get out of the situation he's in and start anew.

The main point about people against Iginla is that he's off to a slow start. Yet, if you look at Iginla in the month of October, he's not too overwhelming. Sure, he's had spots of greatness, but in the grand scheme of things-- the first month of the season hasn't been too kind to him with 61 goals and 138 points in 153 games in October throughout his career. The Flames as a whole aren't usually stellar in October either, but still-- when you look at a guy like Iginla, who is the figurehead for that team-- he'll get most of the attention regardless of who or what's going on around him.

That said, Iginla has said in the past that he would be willing to waive his NMC if it would help himself and the team in the long run. All signs point to the ownership of the Flames not looking to move him, but you almost have to look at it and see if it's going to be worth it. It's hard to not look at that $7M cap hit for the next two seasons after this one and wonder what you could do with that and how you could develop a team with that free space. Sure, the team would lose someone who has been an institution for the team throughout his career, but there's a time where you have to let go of the past and look towards the future.

For Iginla, the change of pace could do him good. He'd probably be shipped to a team that has other stars and offensive threats, which would take the primary pressure off of him; plus he'd be able to play his game as an aggressive winger more freely and not have to worry too much about being the leader and trying to spark the team in one swoop. He'd have the aid that he had craved for so long in Calgary and probably have a better chance at a playoff run with someone else.

When you look at the October 30th game against the Capitals, Iginla was somewhat invisible during the game, occasionally popping up to try and give a hit or what-have-you, but he seemed to blend into the crowd during the eventual routing. As a captain, as a team leader, you would think that he'd be more prominent in trying to change the tide, especially when it was still close. Of course, if he tries to get into a fight; that takes him off the ice, which isn't where you want your star player either-- he's in a rough spot in that instance. That said, when you're invisible, people take notice (ironically) and rumors and questions like these shall arise.

This will be a wait-and-see situation that will probably go nowhere. Iginla is dedicated to the Flames through thick and thin and the ownership is dedicated to Iginla. Even when the going gets tough, Iginla doesn't seem to budge off his stance, nor should he if he has faith in his teammates, coaches, and management. It could be a bad decision in the long run for his career, yet he seems ready to go down with the ship and not having any second thoughts.
Posted by ScottyWazz at 8:20 AM

Bang on Scotty. It's just getting to the painful part. The last few years have been building up to an expected and eventual departure, but will it be handled well?

The real problem I see isn't whether Jarome should or should not leave, as I believe his time is up and agree he yearns for greener pastures, rather the real issue lies in how management and ownership will handle this matter.

The Flames actually have an excellent opportunity to jump a few steps in rebuilding the core of the team - if they choose to move Jarome this season. If, as I expect though, the Flames fail to pull the trigger, I doubt Calgary will be able to get full value.

Sticky situation to say the least, but I do know that the Caps would seriously consider swapping a certain sniper for a proven vet power forward and leader...I'm sure there's even a pick to be had as well!

Final question, do the Sutter's have mad cow?

The part that bothers me about it, as that after a big loss like that, you would expect your Captain to step up and say something, anything. I didn't see any quotes from him and he is not a part of the post game player footage on the flames website. When a team is down a leader has to be there. Just odd not to see anything on that front.