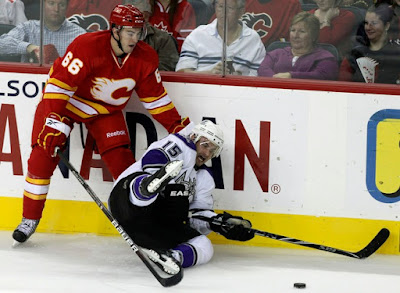 With the demotion of TJ Brodie from Calgary to Abbotsford, many Pittsburgh Penguins fans were rejoiced, as they saw Brodie wearing #66 as blasphemy. While it's no secret my dislike for some Penguins fans, this one is what really gets my goat. Sure, Mario Lemieux was a special player and really means something to the revitalization of the Penguins organization many times over. But Bob McKenzie put into words what many outside of the Lemieux fan club believe.

While many will say that Lemieux was second to Wayne Gretzky in iconic personalities of hockey in the modern era, but I believe that he was great for the Penguins; but the league wide-appeal wasn't there like it was for Gretzky. Gretzky brought hockey to the unrelated market of Los Angeles, thus expanding the game to what we see today.....while that's not a glowing endorsement, it exposed hockey to areas that no one had thought and created a buzz that the sport didn't have in the longest time.

And you know what-- Gretzky's number shouldn't have been widely retired, because it's a slippery slope. Then, when will people say that other numbers like #4, #9, or even #19 be retired. Hell, Ron Francis, Mark Messier, and Marcel Dionne have more points than Lemieux; so when should they retire their numbers?? It should be a case-by-case basis and by the teams they played on. They shouldn't put it in the league's hand to make these decisions because different numbers mean something to different people/teams.

I, for one, support Brodie wearing the #66, if for nothing else but to pester Penguins fans. Plus, why should he change it?? There has to be some reason why he picked the number and to be honest-- why are people trying to take this possible sentimental number off his back and give him a number that won't mean anything to him. Sure, it's a silly explanation-- but so is league-wide number retirement.

I think the retiring of a number is a silly thing to do any way. especially league wide. I get it for maybe a team by team basis, that makes a little more sense. But honestly...it's a number...it's a patch stitched onto a players jersey. The fact that people get offended or upset over someone wearing a number because a hockey great before wore it, is ridiculous.