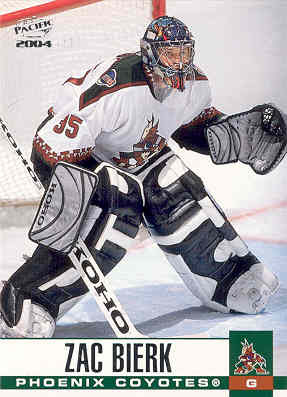 While some of these AGMs are known for having one good year or being a notable back-up or even being the first for something, this week's AGMs is known for being a part of a famous family. Granted, his brother is the most notable of the family-- his does have some very interesting linage. Of course, that didn't translate too well on the ice, but still-- this week, we profile Zac Bierk.

To get it out of the way, Bierk's family is led by his late father David Bierk who was an accomplish painter in North America, while four of his brothers went on to become artist, his sister becoming an actress, and his other brother becoming Sebastian Bach, former lead singer of the band Skid Row. Thus, to say Bierk went off the beaten path is an understatement.

Bierk's career started off with his hometown junior team, the Peterborough Petes in the OHL for the 1993-94 season. While he would only get nine games in as a back-up to Chad Lang, he got his first taste of what it'll be like on a big stage, but went 0-4-2 in those games. Bierk would see more time behind Lang in the 1994-95 season, with 35 appearances and a 12-15-5 record; including getting the bulk of the time in the playoffs, going 2-3 in six games. With Bierk's performance, he would be selected in the 9th Round by the Tampa Bay Lightning in the 1995 Draft. That would boost Bierk's confidence, as he would get the starting role in the 1995-96 season, which would lead to great things in his 58 games, finishing with a 31-16-6 record. Bierk also let the Petes to the OHL Championship, going 14-7 in his 22 games played. As the Petes would go to the Memorial Cup, they would get to the final, but lost to Granby of the QMJHL. In the 1996-97 season, it would be hard to top for Bierk, but he did his best; going 28-16-0 in 49 games, but went 6-5 in the playoffs, losing in the second round. Bierk would win the OHL Goaltender of the Year, Leo Lalonde Trophy for best overager, and first team OHL all-star.

With the success he had the previous year, Bierk would hope to parlay that to the pros in the 1997-98 season, heading to the Adirondack Red Wings for 12 games in the beginning of the season, going 1-6-1 before getting recalled by the Lightning in January of 1998 and would see 13 games, mostly as a replacement, going 1-4-1 for the year on the dismal Bolts team. The 1998-99 season would see Bierk in the IHL with the Cleveland Lumberjacks for the majority of the season, backing up Derek Wilkinson. Bierk would play in 27 games and come away with a 11-12-4 record, though he had a .914 save percentage for his troubles. Bierk would be recalled by Tampa and see one game of action, taking the loss. The 1999-2000 season would be up and down season for Bierk, as he would split time in both Tampa and in the IHL with the Detroit Vipers. While in Detroit, Bierk would play 15 games with a 4-8-2 record, while he would fare better in Tampa, going 4-4-1 in his 12 games there.

Though he did shoe promise, the Lightning left Bierk unprotected in the Expansion Draft and he would be picked up by the Minnesota Wild. However, Bierk would only see on game in Minnesota (a loss) and would spend the majority of the 2000-01 season with the Lumberjacks again. He would get a bulk of the games, playing 48 games and winding up with a 24-18-5 record, leading the Lumberjacks to the playoffs, but he would go 0-3 in the playoffs.

Bierk would be a free agent and get signed by the Phoenix Coyotes in the 2001 off-season. It would back to the drawing board, as Bierk would wind up in the ECHL with the Augusta Lynx, getting only 30 games in due to hip surgery. Yet, in those 30 games, Bierk would go 16-9-3 and get a call-up the AHL's Springfield Falcons for a game, a loss. Bierk would bounce back and forth, racking up miles between Phoenix and Springfield (Mass.) for the 2002-03 season. While in Springfield, Bierk would go 6-4-1 in 13 games there, then going to Phoenix and compiling a 4-9-1 record in 16 games-- though the one tie is one for the books.

It was Bierk's second game with the Coyotes as he went up against the Chicago Blackhawks on January 8th, 2003. At the other end, Michael Leighton, who was in his rookie season. Both goalies played amazingly and the game would end in the 0-0 tie. It was the first time in NHL history that two goalies would record their first shutouts in the same game. Just another little AGM fun fact.

Bierk would be hampered with more hip issues, being sidelined for 50 games in the 2003-04 season due to a strained hip flexor. That would only allow him to play two games in Springfield (0-1-1) and four games in Phoenix (0-1-2) before he would hang up the pads at only at age 28.

The last known whereabouts for Bierk was the Team Shutout Goalie School in Brampton, Ontario, where he was coaching the students there.

If nothing else, Bierk took the road less traveled by the rest of his family members and did very well heading into the professional ranks. Then, he kind of got stuck with some not-so-good teams and then hampered with injuries, thus making him retire before the age of 30. Though, if nothing else, he can get into his brother's shows whenever he wants to-- so that's something.
Posted by ScottyWazz at 8:15 AM

What a terrible article. You're an asshole.