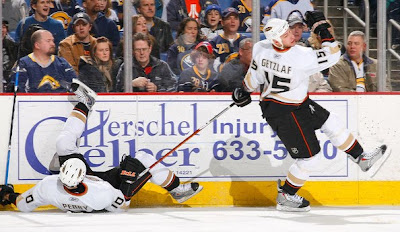 While we're just about three games into the season, it seems that some people have decided to inch closer to the panic button when it comes to their teams. Most of it has to do with teams like the Anaheim Ducks and Ottawa Senators, both are winless in their three games, both with craptastic goal differentials, and both in tough because of some kind of turnover that hasn't allowed the team to gel.

When it comes to the Ducks, they'll get better, but to adjust to losing someone like Scott Niedermayer is going to take any team who doesn't have the adequate replacement for a star like that. Nothing against Andy Sutton or Lubomir Visnovsky; but they aren't Niedermayer. Once they adjust to that, the whole team will get better-- but the confidence is still not there when they look down the bench and not see him around. Also, Jonas Hiller seems to have the post-big-contract-blues that haunt a lot of players in most cases. Once he shrugs that off, he should be able to regain the form that allowed the Ducks to move J-S Giguere. It's going to be a big overhaul for the Ducks and I have to agree with Jonathan Willis over at Houses of the Hockey in saying that Cam Fowler should be sent back to juniors to get more seasoning. However, I don't see them as being the worst in the West at the end of the year.

As far as the Senators go, it's rough being a fan of this team, I won't lie. A lot of blame is being put onto Pascal Leclaire not being as good as the Sens thought-- and that could be true, but the fact they aren't getting any pop from the rest of the team doesn't help too much. The Sens are 27th in the league in shots-for in the league and only the Ducks (29th) are worse and not registering a win, though the Oilers are the worst in the league-- but have two wins. In any case, the big guns aren't firing for the Sens, as Jason Spezza has been dealing with injuries, Daniel Alfredsson seems to have age catching up to him, while Jarkko Ruutu and Chris Neil are tied for the team scoring lead. Let that last part settle in a bit. Luckily for the Sens, they could turn it all around and maybe actually realize they're better than they are playing.

The Devils have to be a bit peeved too, but most of that has to deal with the fact they have run out of money. They're playing with nine forwards and pretty much trying to stay above the minimum roster in order to stay under the cap. Marty Brodeur seems to be a bit rattled and with the injuries mounting-- it's going to be a long year for the Devils if they can't figure out what they need to do in order to fill out a full roster and have some cash to be able to field a full squad night-in and night-out.

Luckily for the Sens and Devils, the East could very well be a clear-cut loss for the Florida Panthers, who are dealing with a lot of other issues-- including their lack of crowd support and trading one of their top players, Nathan Horton, during the summer. Plus, Tomas Vokoun hasn't been playing well at all and only three goals in their two games. This is a team that'll be struggling for goals and will be the worst team in hockey.

Like I said, we're not a week into it and there's a lot that could change. Hell, the Toronto Maple Leafs and Edmonton Oilers are undefeated and they were the worse two teams in the league last year. Odds are, once we get out of October; then the panic can actually be legitimate. However-- it's just a bit of worry and just wondering when the entire team will get traded or the coaches, general manager, and owners all fired. Until then, it's just waiting out the rough waters until things actually get set straight.
Posted by ScottyWazz at 9:35 AM