What's in a Nameplate?? 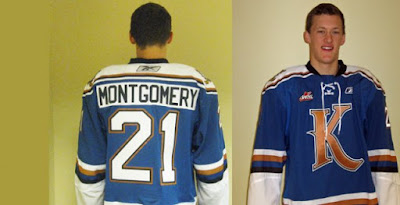 As many of you who have followed this blog know, I'm kind of a fan of the aesthetics of a hockey team. It's part of why I started the Hockey Team Identity Project with The Girl. Now, you all know about my gripes about front numbers, templated design, and unnecessary piping on the new Reebok Edge systems, as I have voiced my displeasure on The Show and here. However, there's something new that's popping up that's starting to become my top annoyance, and it's really showing through in the new Canadian Hockey League third jerseys coming out.

Now, this first came out with the Philadelphia Flyers presenting their third jerseys, which was a homage to their old jerseys in the 1960's and 70's, but they added the touch that wasn't there. Putting a white nameplate with black lettering on the orange jersey. For their Winter Classic jerseys, they put a black nameplate with white lettering on their white jerseys; which has now become their new jersey designs starting this season. While it's something that may not be too bad, considering it hadn't happened in a long while....or ever in the NHL (lack of fact checking makes me say that), it seems that it's gone above and beyond overkill now in the CHL.

The CHL instituted third jersey for this year and so far, there's far too many teams using this new gimmick. The Kootenay Ice (pictured above) is one of the first, while the Kingston Frontnacs and Mississauga St. Michael's Majors have also instituted the contrasting nameplates. All the while the front numbers make an appearance with the Kamloops Blazers' third jerseys; but some teams like the Kelowna Rockets and Tri-City Americans have some kind of sanity when it comes with their new third jerseys.

But with the nameplates, I don't get the whole ordeal. To be honest, I don't think there were many teams who used it when they first instituted the rule of having names on the back of jerseys. It's almost like the ties on the collar, it creates a retro kind of feel, without actually having to deal with the heritage of a team. There's times where it's a neat idea and some times gives the look a very unique feel, but to do it in an overkill way kills any kind of uniqueness that a team could have by doing it.

Maybe, just maybe-- this will be the last of the craze, but at the same time-- I'm sure this could be the beginning of a trend that will rank up there with bad ideas. I understand that people do like the retro feel of some jerseys; but in the end-- to put unnecessary retro themes on teams that aren't really that retro (Kootenay was founded in 1996 when they were in Edmonton). It's to the point where you should almost have an unwritten rule of jerseys and how the make-up of one could be-- like if you've only been around for a decade, make something to not stray too much from the current identity; while a team that's been around for 25 seasons can actually make some retro designs for the years they've attributed into the league...or something.

In any case, I'll be hating this just like all the other stuff the Reebok Edge has given us.
Posted by ScottyWazz at 9:50 AM

I blame the Flyers. It was cool when they did it with the Orange jerseys ... the whole story of needing nameplates for TV and only have white ones for the home jerseys. When they made the black nameplate and threw it on the white jersey ... that took it too far, and brought in the masses.

I also blame the Flyers for global warming, and anything else that could possibly be wrong in the world.