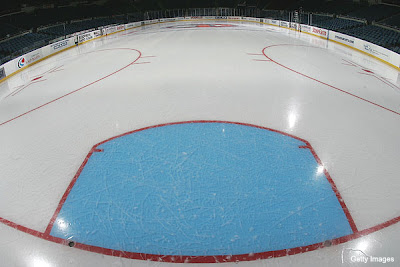 The NHL pre-season starts tonight and for most people, this is the start of the season and everyone is so excited. It's interesting enough for TSN to broadcast the Senators and Maple Leafs game tonight. It seems like it's all coming together, even though we all know Pierre McGuire needs that extra practice being loud, annoying, and awkwardly close to players and his fellow commentators.

Maybe it's because I'm cynical, maybe it's because I'm so into the ACTUAL season, maybe I'm not as big of a hockey fan as I thought I was; but I can't get up for pre-season. Nothing about the pre-season gets me all hot and bothered and ready for the season to begin. Even in the off-season, I never had a hockey withdraw or wanting October to show up quicker than the Earth can spin.

While I get people wanting hockey to start and all of that, I just don't get how people are getting antsy over the pre-season and training camps and all of that. I'm glad to see people go out to training camps and getting some information out there and supporting their team, but there's something that makes me not get too excited to see fringe players battle it out for a roster spot or their location on the AHL depth charts.

If nothing else, you have to appreciate the spirit of the fans who actually care enough to go out there to the rinks, even for rookie camps (guilty, but with reason). However, it seems that the pure volume of updates from everywhere is what drags down my spirit and what drags down my excitement for hockey to actually come back. I'll be glad when it comes back for real, but it's a matter of patience for it to come back. No amount of intrasquad games, rookie games, and fringe games will ever get me as excited as the real thing.

It's probably just me, mostly because I am a cynical fellow and I probably will drag myself to the Saddledome to see some camp activity, but I still won't be all in for the excitement level as some people, which is fine for them. For me, there's times I need a breakaway from hockey and into some other interests. God love you if you are hyped up for it all, because it's that kind of passion that could leech onto others who don't have it. Yet, be careful because it could be the same passion you have that become a bit overwhelming for some and drives them away.

While the "IsItOctoberYet" hashtag on Twitter is annoying in July, it's a bit more fitting now. It's close and you can almost taste it and it does create anxiousness for the season-- but mostly because it's time to cut through all the crap and actually get down to it. It seems this summer has been the longest off-season on record, but for some-- it's good. I'm ready for the regular season to start so the off-season silliness is over with.
Posted by ScottyWazz at 9:45 AM