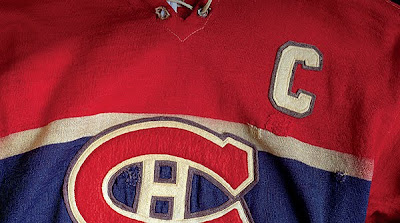 Personally, I can't remember who said it; but someone on the Twitter made a comment about if NHL teams didn't have a captain on their roster, would anyone notice?? This was in direct response to the craziness that broke today that La Presse knows that Brian Gionta will be named the new captain of the Montreal Canadiens, the second American to have the honor. That has not been confirmed by the Canadiens themselves, but it's probably going to come out in the next little while here.

Now, the comment made by someone I'm following was interesting and something that is very thought provoking, especially considering that there have been many teams without a captain for a while and didn't seem to be in any hurry to have a captain. The Canucks, Thrashers, Oilers, Sharks, and Ducks are looking for a captain, the Wild and Blue Jackets had rotating captaincy for the longest time before they settled on one person just recently to carry the letter. The Maple Leafs went without a captain for years because they didn't see anyone with the ability to do that until Dion Phaneuf came along. With that out there, what kind of importance or is there any importance to the captaincy anymore??

The captains role used to be about having a veteran presence on the team to be the leader of the team and be able to motive players, especially the younger ones, into playing as a cohesive unit. There's seve teams with captains who are going to be 25-and-under at the start of the season: Dustin Brown, Eric Staal, Jonathan Toews, Alex Ovechkin, Sidney Crosby, Mike Richards, and Shea Weber. Granted, Staal and Brown will turn 26 within the first two months of the season; but still the point is that the younger guys are getting more respect over the veterans; which makes you wonder if it means something due to older vets getting overlook for the same position.

Plus, the topic of alternate captains is getting out of hand, too. It seems the ridiculousness of having everyone on the team have an alternate captaincy is more absurd than the question of who's going to be the next captain. It used to be that you have only two alternates, but now you see three and four guys have the "A" stitched to the front of their jerseys-- the Blue Jackets having six alternates, many of which switch on and off between home and road games. It's almost crazy the amount of people who actually have these letters on there.

On top of all of this, the fact almost anyone can chirp at the officials nowadays; the role of the captain seems very diminished from what it once was. Even so, the fact you have plenty of leaders in the locker room and on the ice that don't have anything attached to the front of the jersey; what's the true need for a captain to be identified?? There are so many teams with veterans on the ice who know what to do already, they shouldn't be discounted for not having a letter on their jersey and I doubt they're getting motivated by the young captains because they are probably giving the young kids advice on how to be a leader and what to do in certain situations.

Therein lies the rub, you have the captains getting advice from a veteran. If you're the captain, shouldn't you be the one who is the go-to guy with advice rather than getting advice. You can't believe that Mike Richards or Sidney Crosby knew everything that there is to know about leading a team, so they went to their many veteran teammates for help. It's hard to have a respect factor of the captaincy when the supposed leader is being taught how to be led. It's not a knock on Richards or Crosby because they should have gone to the veterans for advice, but it's a knock on the organizations for giving the captaincy to the youngsters, when they aren't going anywhere and should be given the time to learn the league before bestowing the official leadership on him. Another topic is that of having official leadership over unofficial leadership-- but I think the point is there in my rambling.

In the end, odds are we'll still see captains out there and we'll still have debates on who should and shouldn't be given that honor. Debates will rage on when someone gets stripped of the captaincy and then gets traded, but in the end-- it's a topic that really shouldn't matter. Yes, they are technically the leader of the team officially, but the captains are really just figureheads. If not for the tradition of hockey having it, it could have probably been obsolete by now. I mean, hockey the only sport with the big tradition of captaincy, as many other sports have just started recognizing it, like the NFL and some MLB teams. Does it really matters who's captain?? Probably not, which is why it's starting to really become as relevant as cassette tapes and VHS. The best players will always be the spotlighted guys and be the most talked about players regardless of if they have a letter or not and you'll always have guys who are going to be considered leaders of the team even if they have a letter or not.

However, the best players aren't often captain material either; but that's another rambling rant for another time.
Posted by ScottyWazz at 12:30 PM