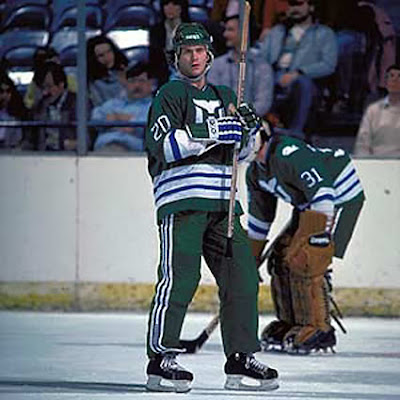 This announcement was made on Monday, and we all know I've got breaking news covered like a jimmy hat, but the Hartford Wolf Pack of the AHL was sold to Howard Baldwin, founder of the Hartford Whalers, and the team will change it's name from the Wolf Pack to the Connecticut Whale starting in the mid-season "between US Thanksgiving and Christmas" with a new logo and jerseys on February 19th, 2011.

Now, the first thing that is annoying to me is the fact that they aren't committing to the whole "Whalers" theme like people want them to. Whether it's a logistics thing or if it's a reason to keep the name reserved should the Hartford area get a NHL team in the future; I can see why they may not want to go all-in with it; but with that a while away-- why not put the Whalers name to it?? Even if it's the Connecticut Whalers, you may as well get the most out of the Whalers fever and not let the NHL and the OHL's Plymouth Whalers get all the bank because of it. The Whale...I don't know, doesn't have the pizazz of other names out there. However, the headlines of a team when they lose, like the classic "Fail Whale Last Night" and "Beached Whale" if they lose to the Norfolk Admirals; would be epic.

However, the second thing is the real thing that bugs me. Why are they waiting until the season is almost done to roll out a new identity?? While I'm sure it's too close to the season to get everything ready for the identity to roll out for the 2010-11 campaign, but why not wait until the next season rather than flip the script mid-to-late season?? They want to make the bank, sure, but you really should do it immediately before the season starts, and let's face it-- a month isn't too quick for everything to be switched up, I'm sure. To do it that late in the season, while great for PR purposes if people get disinterested in the team, just seems like a silly move and ruins the Wolf Pack identity that just gets killed swiftly like that.

While it's great to have the heritage and following that the Hartford Whalers have, you almost wouldn't want the history of that name and team to be diminished with nothing less than a NHL team. The close proximity to the name may tarnish the name that many hold dear to their hearts and could cool the fandom that the Whalers have created since they left Hartford in 1996. I understand why the fans would want the Whalers to come back, but this may be an issue of flying too close to the sun with paper wings....or something. The point is that while there's heat on the Whalers now because they have merchandise freedom now, you can only milk the cash cow for so long before it all goes to hell.

In the end, it'll be interesting to see how this will all take. Sure, you have a lot of fans who are used to the Wolf Pack identity, but it would probably be killed by the fans very quickly; which could be a shame for those who actually enjoyed that for the team. You can bet you'll have a lot of Hartford Whalers garb in the stands to start.....probably more than usual, of course. And while the Whalers are the trendy logo now, how long before it's over-saturated and unbearable?? Only time will tell, now.
Posted by ScottyWazz at 11:00 AM