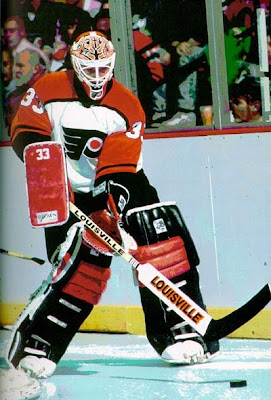 While the theme of these AGMs are usually lost potential for goalies, this one is a story of a guy who had to deal with a lot of bad NHL teams, but a lot of great minor league teams. Each task, he took in stride; though-- happy to just be there in the show after going undrafted in the first place. Plus, he took all the time in the minor in stride. This week, we take a look at the career of Mark LaForest.

Laforest's first foray into the goaltending fraternity started in the Ontario Junior B ranks with the Welland Cougars, playing 23 games with a 5.56 GAA. That was able to take him into the OHL, playing with the Niagara Falls Flyers for the 1981-82 season. LaForest was part of a large goaltending contingent in Niagara, getting in 24 games-- the most of the five goalies used-- and went 10-13-1 in those games. LaForest moved with the team to North Bay and would see a lot more time in net, playing 54 games in the 1982-83 season with a solid 34-17-1 with a 3.73 GAA, but then went 4-4 in the eight playoff games.

After going undrafted, LaForest was signed by the Detroit Red Wings and would head to the IHL to start the 1983-84 season. LaForest would start with the Kalamazoo Wings and play for 13 games with a 4-5-2 record before getting a call up to the AHL's Adirondack Red Wings with a 3-3-1 record for his seven games of action. For the 1984-85 season, LaForest would play first back with Adirondack for 11 games with a 2-3-1 record, but would move to the ACHL's Mohawk Valley Stars for eight games at the end of the season. The 1985-86 season would be a changer for LaForest, who would start with Adirondack again, but only for 19 regular season games (13-5-1, 2.99 GAA) before getting a call up to Detroit to play for the Wings. LaForest would get 28 games in on a horrific Wings team, going 4-21-0; but at least have that for experience. LaForest was sent back to Adirondack in time for the AHL playoffs, where he went 12-5 to help Adirondack win the Calder Cup. LaForest won the Baz Bastien Award for Outstanding Goaltender award for the year in the AHL. LaForest would be back in Adirondack for the 1986-87, playing 37 games and going 26-8-2 with a 2.83 GAA and .911 save percentage. LaForest would get a mid-season call-up with Detroit, playing five games with a 2-1-0 record.

In June of 1987, LaForest was traded to the Philadelphia Flyers for a second round pick in the 1987 Draft. LaForest would start the 1987-88 season with the Flyers, playing four games before being sent to the AHL for the Hershey Bears for five games, going 2-1-2 in that time. LaForest would get called-up mid-season to Philadelpha and play 17 more games with a total record of 5-9-2; as well as getting two games of playoff time in, going 1-0 in his games. At the start of the 1988-89 season, LaForest would catch on with the Flyers for the first part, going 5-7-2 in 17 games before being sent down to Hershey, where he would go 2-0-0 in three regular season game and then 7-5 in 12 playoffs games.

In September of 1989, LaForest was traded from the Flyers to the Toronto Maple Leafs for a 6th and 7th Round Pick in the 1991 Draft. LaForest caught on with the Maple Leafs as a back-up to Allan Bester and former AGM Jeff Reese. LaForest got into a bit of injury trouble after injuring some knee ligaments slipping on some eyes outside of his house. He got sent to the AHL's Newmarket Saints for some rehab (6-4-0) before being called back up to Toronto to end the season with a 9-14-0 record in 27 games.

Left unprotected for the Expansion Draft, LaForest was claimed by the Ottawa Senators in the 1992 Draft. LaForest would stay in the AHL with the New Haven Senators to start off the 1992-93. He would play in 30 games with New Haven, sporting a 10-18-1 record. LaForest would also play 10 games in the Colonial Hockey League for the Brantford Smoke with a 5-3-1 record for his time there. The 1993-94 season saw LaForest on an island all his own-- Prince Edward Island, where the Senators took their affiliation. LaForest would get 43 games in for lowly PEI with an 9-25-5 record. Due to his loyalty or lack of other options, LaForest got a call up late in the season by Ottawa, playing in five games with an 0-2-0 record.

Without a team to sign him, LaForest signed with the Milwaukee Admirals of the IHL for the 1994-95 season. LaForest continued to play well in the minors, with a 19-13-7 record in the regular season and a 7-4 record in the playoffs. LaForest would stay in Milwaukee for the 1995-96 season, improving his game from the previous year. LaForest was able to get 53 games of action and come home with a 26-20-7 record and only a 2-3 playoff record. LaForest went back to the Binghamton Rangers for the 1996-97 season, but only for nine games with a 0-4-1 record. After being let go, LaForest would head to the Colonial League again with the Utica Blizzard for six games with a 1-2-2 record. With no other suitors, LaForest hung up his pads after the season.

LaForest's last known whereabouts was in Niagara Falls working for the Niagara Fallsview Casino Resorts. Though his record in the NHL wasn't what he thought it would be, considering that he did so well in the minors. Even so, LaForest looks back fondly on his career, mostly the Calder Cup championship season. Oddly enough, he follows the formula for the AGM somewhat, but giving the circumstances he was put in-- he could have done a lot more; though it doesn't seem like he regrets it.
Posted by ScottyWazz at 8:15 AM