What's Next For The Avalanche 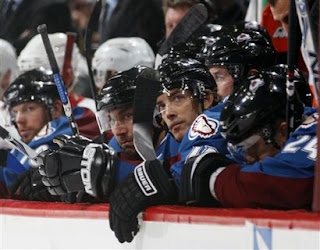 The Avs run looked promising after they disposed of the Minnesota Wild, but the hot goalie for the Avs this season, Jose Theodore, crapped out against the Red Wings. Now, it's time to see what the Avs need to do to build off this season.

First, they need to see what's going to happen with Joe Sakic. They'll need to find out what the Avs' captain will do and then move from there. After an amazing season in '06-'07, Sakic was slowed by a groin injury and then hernia surgery, but still almost managed a point per game. However, he will be 39 when he heads into next season and could be time for his swan song to let the younger players come together.

Outside of that, the Avs are pretty solid up-front with no one, sans Andrew Brunette and Sakic, to worry about re-signing. The young core group of Paul Stastny, Wotjek Wolski, and Marek Svatos to build on, the Avs should be very solid for years to come.

Defensively, John-Michael Liles, Adam Foote, Jeff Finger, and Kurt Sauer are all UFAs, with Liles and Foote getting a big push to get re-signed. With Brett Clark coming back from injury and Scott Hannan in his second season for the Avs, the blue line seems pretty solid and definitely bounced back from last season.

The big question mark will be in goal. Jose Theodore played well enough to get a contract from the Avs, though it will be much, much lower than what he received in his last contract. We'll see what the Avs do and how they'll handle Peter Budaj, who has one more year left in his deal. Expect the Theodore re-signing since the goaltending free agent market is thin and that the Avs have nothing in ways of goaltending prospect on the horizon.

All in all, it was a great bounce back season for the Avs, who missed the playoffs last season for the first time since the franchise moved to Denver in 1996. If they can keep their defense in tact with their stellar offense, as well as avoid the injury bug that hampered them last season-- the Avs could put another long playoff streak together in the very near future.
Posted by ScottyWazz at 12:21 AM

Email ThisBlogThis!Share to TwitterShare to FacebookShare to Pinterest
Labels: Colorado Avalanche, What's Next