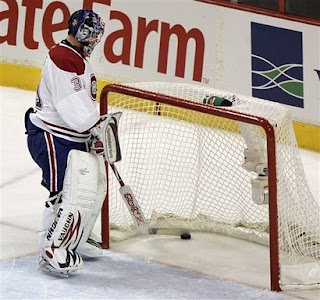 There has been a lot made about what Guy Carbonneau has been doing with his goaltending situation. His decision in Game Four to sit Carey Price in favor of Jaroslav Halak created a ruckus in ways of the media in Montreal. Why would Carbonneau sit the franchise player for someone who hadn't started in almost three months?? Forget that Price let in three goals on 12 shots in Game Three, you'd have to discount that and go back to your bread-and-butter goalie, right??

No, and maybe more coaches should take Carbonneau's lead.

Sure, in some cases, like San Jose and Dallas-- you don't sit your starter because of one bad performance. That said, in a case like, say, Calgary-- where Curtis Joseph steals a game for you to get you ahead in the series, you should at least think about going back to him in Game Four to see if Lightning can strike twice and maybe have the goalie with the hot-hand to carry you through the series.

Granted, some times when you do pull your starter in favor of the hot-hand; the adverse effect happens when the starter can't find their form once the get the chance again, or in the very rare instance-- the starter becomes a nuisance and disrupts the locker room and team.

However, you have to take a chance. It's the playoffs and often tomorrow is closer than some team can bear. You have to roll the dice and see what happens. If it pans out, then you're hailed as a genius and you have the admiration of the media and fans. If it doesn't, the second-guessing of your abilities happens and then you get mocked by the same people who would have praised you. At the same time, if you don't make the change, the second-guessing will happen when the series is over. It's really a "damned if you do, damned if you don't" situation.

So cheers to Guy Carbonneau for shaking things up a bit and making a somewhat dull Round Two a little more exciting. Granted, tonight could be his last night for the season, but you have to take some chances to get success.
Posted by ScottyWazz at 11:38 AM