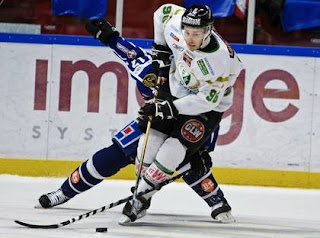 After weeks and months of speculation on what he may do, Fabian Brunnstrom has made the decision to play for the Dallas Stars. Many times, Brunnstrom has been rumored to be signing with the Vancouver Canucks and the Detroit Red Wings, but in the end, the Stars are the place for Brunnstrom.

Now, the biggest question of them all-- with all the hype and all the press this 23-year-old has been getting, will he pan out to what has been written about him??

The Swedish forward has been a hot topic item since his break-out season last year in Division 1 Swedish hockey putting up 37 goals and 73 points to go along with a +51 with Boras HC. This season, playing with Farjestads BK in the Swedish Elite League, Brunnstrom has nine goals and 37 points in 54 games with a +4 rating. That put him tied for 18th in the League, while his 28 assists tied him for 7th in that category.

The resume is definitely something that will attract the teams and the attention of many people, however, the NHL is a much different place than the NHL. It'll be a little more physical and a little better goaltending. Especially on a team that has the skill sets as the Stars, it'll be interesting to see what kind of role the young Brunnstrom will play in the line-up.

With so much buzz and hype around him, the microscope will be focused squarely onto Brunnstrom and to see what he can do in the NHL setting. If it's a flop for Brunnstrom, then it'll be a lesson to some teams about who to trust in their scouting staff and how to deal with buzz and hype given to an overseas player. If Brunnstrom is able to flourish, then the scouts who first got the sniff of Brunnstrom will be hailed as legends in the game.

Needless to say, I'm glad that this whole ordeal is done with. I was getting a little sick of all this speculation of where he would go and when he would sign. Just to get his name out of the headlines for a little while will be a relief for me and other hockey fans I'm sure.
Posted by ScottyWazz at 5:37 PM