What's Next For The Canadiens 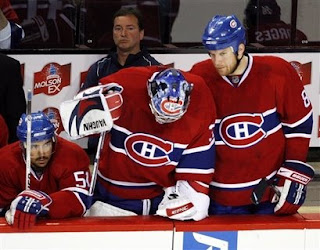 There was plenty of promise for the Montreal Canadiens heading into the playoffs. They had the most goals-for in the regular season and looked primed to take the Eastern Conference by storm. That was not to be as the Habs barely scraped by the 8th seeded Boston Bruins, and then got outplayed by the Philadelphia Flyers to put them to the golf course.

There's some questions that will need to be answered in the next couple of months, like what's going to happen with a couple of their UFAs, like Michael Ryder, Patrice Brisebois, and Mark Streit. Ryder will more than likely be gone from Montreal, while Streit will likely be retained due to his versatility. Brisebois is a bigger question mark, as he didn't play amazing, but didn't play horrible either. There's plenty of things GM Bob Gainey will need to look at when trying to re-sign these three.

However, there's plenty to build off of. The offense for the season was great for the Habs, with their power-play being tops in the league in the regular season. Yet, in the playoffs, the PP was nowhere to be found, currently ranking 13th out of the 16 playoff teams. Also, it wasn't as explosive as it was in the regular season, with goal-scoring by committee it seemed. Alexei Kovalev and Andrei Kostitsyn led the way with five a piece, but neither of them really took control for the Habs nor set a big pace for the team. Saku Koivu played well, though, after he came back with a foot injury.

Defensively, the big guns of Mark Streit and Andrei Markov were shutdown in the playoffs, only collecting only four points in the playoffs a piece and really held in check. Obviously, with their offensive prowess, neither Streit nor Markov were too, too defensively responsible, but Roman Hamrlik and Mike Komiserek picked up the slack on the defensive side of things and the play along the boards. With this core together for another couple of years, things will get better and better.

The Carey Price era got off to a respectable start, but had its bumps along the way. That said, he is a 20-year-old starter who pretty much got thrown into the fray with the trading of Cristobal Huet at the deadline. Price had his shaky points, but what rookie doesn't?? Just seems that his performance was magnified for the stage he was on and the location he plays in. He'll get better as time goes on, plus he has the right demeanor to be playing in a big hockey city like Montreal. Just so long as he doesn't buy into what's being written up, he'll be leading the Habs back to the promised land sooner than many think.

There's a lot of promise for the Habs to work with and there's plenty of time to watch these kids to grow and play together as a team. With the right balance of youth and experience, the Habs have a make-up for a Cup contender year-in and year-out.
Posted by ScottyWazz at 7:45 PM

Email ThisBlogThis!Share to TwitterShare to FacebookShare to Pinterest
Labels: Montreal Canadiens, What's Next