Risk of the Reunion 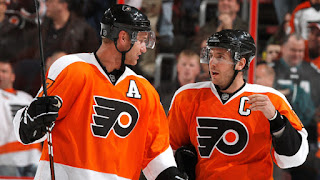 With the trade that will bring Jeff Carter back to Mike Richards' side, you have to wonder if this is a smart move to try and get Richards, Carter, and the Kings going offensively. As much as people say that the Carter/Richards combination is poisonous because of their off-ice antics in Philadelphia-- the fact they were two wins away from a Stanley Cup with the Flyers should say more than whatever they did on South Street on any given night.

Though at the same time, you think through hockey history and the number of successful reunion moments aren't as memorable as the ones that tank.

One of the more famous duds of duos coming back together was Paul Kariya and Teemu Selanne's short tenure in Colorado with the Avalanche. While the two of them were 1-2 in scoring for the Anaheim Mighty Ducks for three of the four full seasons they played together between 1996 and 2000; the trial in Colorado was less than stellar. That 2003-04 season resulted in 36 points for Kariya and 32 points for Selanne. Granted, Kariya only played 51 games that season, the fact that it's a forgetful part of both of their careers shows that you can't trap lightning in a bottle all the time.

Looking back at one of the most dynamic combos in the 1980s was that of Wayne Gretzky and Jari Kurri, who put up five 100+ point season when they were on the fire-wagon Oilers, winning four Stanley Cups in the progress. However, when they met up again with the Los Angeles Kings, Gretzky still had his magic, but Kurri seemed to have dropped off, especially with Luc Robitaille coming into his own. Not to say that was a bad reunion, just didn't have the desired results many would have thought.

You could almost say the same for Jaromir Jagr and his combination with Martin Straka, but had some success with Robert Lang. Though Jagr ran the Penguins team, Straka was a guy that many thought could play alongside him  and make him effective-- which is why the Rangers went out and got Straka after the lockout. Yet, while Jagr succeeded at first and slowly declined-- Straka could never really get going and Michael Nylander would take the running-mate job from Straka. With Lang, he was steady with the Penguins when Jagr was there and stayed steady when the Capitals acquired Lang-- though he wouldn't get much of a chance before Jagr was shipped out of Washington.

Dean Lombardi and the Kings had to do something to jump-start their offensively challenged squad because there's only so much Jonathan Quick can do without goal support. Here's hoping it pays off for Carter, Richards, and the Kings-- mostly because those two are in La-La Land until at least the end of the 2019-2020 season, which is when Richards' contract runs out-- and heaven knows there won't be many suitors to take either off of the Kings' hands-- especially when they amount to almost $11M against the Kings' salary cap. Should be fun times-- whether you like watching the Kings becoming an exciting team or just enjoy the comedy of errors that could follow.
Posted by ScottyWazz at 8:00 AM