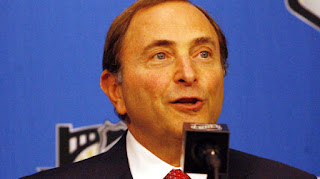 It was 19 years ago today that Gary Bettman became the 1st and, to date, only commissioner of the the NHL. Prior to that, the leader of the sport was called the president of the league-- but either or. The fact remains that while he could be the most polarizing figure in the NHL today-- for me, he's one of the best heels the NHL has ever seen.

During his 19-year tenure, Bettman has brought about six expansion teams (Florida, Anaheim, Nashville, Atlanta, Columbus, and Minnesota), seen five relocations (Dallas, Colorado, Carolina, Phoenix, and Winnipeg), and has had control of a couple teams as well (Ottawa, Phoenix, and hand in Buffalo's first transition).

While he did try to force hockey into markets that purist didn't quite like, they have seemed to make a niche for themselves in their local area, albeit with some tough times having to be travelled in order to get to the successful area. Hell-- many of the "Sun Belt" teams have gotten the honor of hoisting the Stanley Cup-- Anaheim, Carolina, Dallas, Tampa Bay-- really making Bettman feel silently smug, I'm sure.

More over, Bettman got the NHL to the mainstream, starting with bringing the NHL to FOX in 1995 for $155M, then going to ESPN/ABC in 1998 for $600M, then moving to the OLN/Versus/NBC Sports Network contingency first for $270.5M and more recently $2.2B over the next ten years. While the bitching will always be around that it's not enough or not seen enough by people travelling or in their own market-- but he's getting the deals done in order to put it out there-- if your cable or satellite provider doesn't have it....you may want to take it up with them.

Sure, Bettman did cancel the 2004-05 season and played hardball....like his bosses the owners want....he got the salary cap the owners wanted and what they felt they needed-- although their greed really got crazy from the onset, but still-- he can't protect the owners all the damn time-- but will take their side because they are his bosses.

Many point to him being a basketball guy, but who's to say that in order to run the league and listen to the people to own the teams, you have to know the game?? I bet he doesn't know all that much about basketball when he worked at the NBA. He's a lawyer and knows how to go about things and knows how to market things (right or wrong as they may be) and knows the legal game for when it comes to collective bargaining.

He is the heel and takes the heel heat, and embraces the role well, taking it in stride. He has built up an astonishing amount of revenue for the league, for the owners, and the players-- because without the revenues, players wouldn't be getting the salary they would; though many debate on how much a player is worth on a player-by-player basis. Bettman probably has a much stronger personality than anyone you could put in there.

I, for one, will always be a Gary Bettman fan.....regardless of how infuriating some of the decisions he has made has made me. The personality is what turned me into a believer. Long Live Bettman!! Hashtag-- heel.
Posted by ScottyWazz at 10:00 AM