Is the Buffaslug is the New Fisherman?? 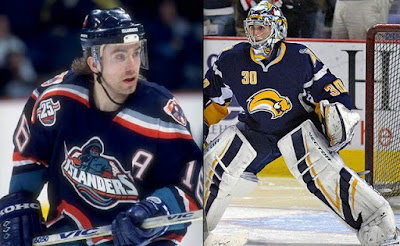 Now, I've gone on before about the '90s era of jersey becoming the new found retro (with the same Ziggy Palffy photo...) and I think I may have found the new trend of one logo/identity that will be hail as awful at the time, but when looking back on it was so bad that it was actually cool, neat, and hip to have in the present day.

Now, this isn't because I bought an authentic jersey and fancy Buffaslug hat on the very cheap and hoping to get on the ground floor; but when I look at it in-depth-- this could be something that in a few years could be the nostalgic dream for some fans and collectors alike. Much like how the Gorton's Fisherman Islanders jersey is fondly look back and has many people pining to get their hands on a jersey.

Sure, the two have their difference, but if you'll allow me the time and the begging capabilities, I'll see if I can show the similarities and change your mind on how you look at the Buffaslug.

1. Both were quite the change for each identity, but different for each team. The Islanders went from their normal blue and orange to a drastic addition of teal and silver and switching from royal blue to navy blue-- quite the change from a team who had the tradition of the royal and orange. The Sabres were going back a yellow and blue scheme (again, navy instead of royal), but it was from a drastic overhaul prior where the team went from their traditional set to a whole new color scheme of black, silver, and red. The Sabres at least tried to right things.

2. The logos were....interesting. The Islanders at least tried to capture the spirit of their name; getting an actual mascot/logo on there rather than the "NY" combination in a circle with a hockey stick coming from the "Y" and a silhouette of Long Island behind it all. The Buffaslug trying to almost modernize the original Sabres logo, but it also combined the "angry goathead" they had in the black and red days. Both, very drastic changes, but tried to capture the spirit of the thing.

3. Both teams reside in New York.

4. The fact remains that it was a stop gap to get to a new modernized version of the identity they had before. After the Fisherman failed, the Islanders kept the wavy jersey pattern with the old logo for a season before going back to a more traditional look, but with a navy blue and orange motif. The Sabres did the same, moving back from the Buffaslug to a modernized version of their original scheme, again switching out the royal blue for navy to go along with their yellow look.

5. Each will have their lovers and their haters. Personally, the kid in me enjoyed the Fisherman jersey when it came out because it was something you didn't see in other logos and it was bright and colorful-- as a 12 year old, that's what you go for. Still to this day I regret not getting a Fisherman jersey. The Buffaslug will have people remembering it for being closely related to the Flinstones' Royal Order of Water Buffalo hat, but it's something that won't go away from the memory of people too soon and some will look back on it fondly and maybe actually want it come back-- if only for a goof.

6. With both, the alternate logo seemed to go with it as well. The Islanders had a great alternate logo with the wavy jersey of the lighthouse with the crazed colors to it. That went away when the jersey went away and it shouldn't have. The Buffaslug also ushered out the "B" with the sabre through the openings-- which was there for the black and red era and was a fairly bad-ass looking alternate as well.

Both are long dead and buried, but much like the underground movement of the Fisherman jersey coming back; so, too, could the Buffaslug. It's a far reach, but it's one of those logos that seemed like a good idea, but the execution is very off.
Posted by ScottyWazz at 8:20 AM