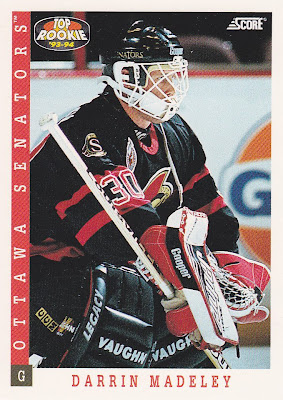 With the amount of players jumping for college hockey to the major junior route, this week's AGM didn't go that way. He had an outstanding career in college; but he wasn't a part of the trend of college goalies going on to surprise and astound in the NHL ranks. This week, the profile of Darrin Madeley.

Coming off the high of his performances in college, Madeley made the jump to the pros, signing with the Ottawa Senators, becoming one of the first Senators to come to the team via free agency. Madeley made two appearances with Ottawa in the 1992-93 season, losing both games; before he would be sent down to the AHL's New Haven Senators-- playing in 41 games with a 10-16-9 record on that team, which enabled him to take home AHL Second-Team All-Star honors. The 1993-94 season had Madeley stay in Ottawa for the majority of the season; being able to get into 32 games for Ottawa and finishing off with a 3-18-5 record, while going 0-4-0 in six games with the AHL's PEI Senators. The traveling for the 1994-95 season was the story for Madeley, playing in the IHL for the Detroit Vipers for nine games (7-2-0), then going to the PEI Senators for three games (1-1-1), then finishing the season with Ottawa, going 1-3-0 in five games in that season.

The 1995-96 season saw Madeley in the IHL with Detroit for the majority of the season, getting him 40 appearances and finishing off with 16-14-4 record in the end, while going 3-3 in seven playoff games. Madeley would win his only game with the PEI Senators.

Madeley signed a contract with the San Jose Sharks just before the 1996-97 season, while it landed him in the AHL with the Saint John Flames where he would play 46 games and go 11-18-11, while playing with the Detroit Vipers for four games going 2-0-0 on the season.

For the 1997-98 season, Madeley tried his hand at international play, going over to Finland to play with TPS Turku. That would only last for two games, going 1-0-0 before returning to North America. The Richmond Renegades of the ECHL signed Madeley, where he would play five games with a 1-1-0 record. Madeley went back overseas in the 1998-99 season to play in Germany for Star Bulls Mannheim for three games before returning to North America and the ECHL, but with the Pensacola Ice Pilots, going 12-16-3 in 32 games before he would hang up his pads.

After his playing career, Madeley went onto the coaching ranks, where he is the Assistant Athletic Director and Director of Hockey at Lake Forest Academy in Lake Forest, Illinois.

He had his success in college, but because of the whole debacle of going to an expansion team; which stifled his possible success in the professional ranks. Though you have to wonder with all the personal accomplishments, would he gives those up for team success in the pros or would he keep all of that because of what became of him when he made the move?? Maybe we'll never know.
Posted by ScottyWazz at 8:00 AM