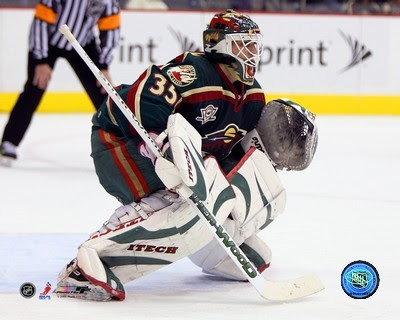 Jumping back into the modern day this week with a guy who kind of has a tie-in to the past few weeks in the NHL. He made his name in the location where the NHL Draft was held this year, then he ended his career in the home of the new Stanley Cup Champions. This week, we look at the career of Manny Fernandez.

The hike to the top for Fernandez began with playing Midget AAA with the Lac St-Louis Lions, while going 13-5-0 in 20 games. Fernandez would be bump up to the QMJHL in the 1991-92 season, playing with the Laval Titan and appearing in 31 games with a 14-13-2 record, then going 3-5 in nine playoff game. Fernandez would be drafted that summer by the Quebec Nordiques in the third round. The 1992-93 season would be a solid one for Fernandez, first going 26-14-2 in 42 games; then running off a 12-1 record in the playoffs-- helping the Titan to the QMJHL title and the Memorial Cup, where he'd go 2-3 in those five games. Fernandez would win QMJHL Playoff MVP for his solid record with the Titan. Fernandez had another solid season in 1993-94, going 29-14-1 in 51 games with Laval, then going 14-5 in 19 playoff games; though losing in the Finals. Even with the lose, they were the Memorial Cup host and again Fernandez would go 2-3, losing in the Final. Even with the playoffs; Fernandez was QMJHL's MVP and would be on the First Team All-Star squad.

During the 1994 trade deadline, Fernandez's right were traded from the Nordiques to the Dallas Stars for Shjon Podein and a pick that would turn out to be Chris Drury. With the change of scenery; Fernandez would jump into the pro ranks in the 1994-95 season with the IHL's Kalamazoo Wings and going 21-10-9 in 41 games, while going 10-2 in 14 playoff games. Fernandez would also appear in one game for the Stars, which was a loss. The 1995-96 season had Fernandez sticking with the now rename Michigan K-Wings, playing in 47 games with 22-15-9 record, but going only 5-1 in six playoff games. Again that year, Fernandez would move up to the Stars, but for five games and a 0-1-1 record. It was a shaky 1996-97 season for Fernandez, only posting a 20-24-2 record in 48 games, then 1-3 in four playoff games. Yet, the 1997-98 season was a bounce-back year, as Fernandez would go 27-17-5 with five shutouts; then going 0-2 in the playoffs. Again, Fernandez would play in Dallas for two games with a 1-0-0 record. Fernandez would shift to the Houston Aeros of the IHL for the 1998-99 season, going 34-6-9 in 50 games before going 11-8 in 19 playoff games; helping the Aeros win the Turner Cup. Fernandez had a loss in his only appearance for the Stars.

The Dallas Stars finally gave Fernandez a chance as a back-up for Ed Belfour in the 1999-2000 season, going 11-8-3 in 24 games, then having a no-decision in his only playoff appearance.

Fernandez would be pushed out by the up-and-coming Marty Turco, so Dallas trade Fernandez along with Brad Lukowich to the newly formed Minnesota Wild for some draft picks. The 2000-01 season had Fernandez split time with Jamie McLennan, but Fernandez was the better of the two with a 19-17-4 record in 42 games. Fernandez would split time with Dwayne Roloson in the 2001-02 season, getting in 44 games and finishing with a 12-24-5 record. With Roloson excelling, Fernandez would be relegated to back-up for 2002-03, compiling a 19-13-2 in 35 games, then appearing in nine playoff games with a 3-4 record. Yet again for the 2003-04 season, Fernandez was the "1b" and would get in only 37 games with a 11-14-9 record at the end of it all.

The lockout brought Fernandez to Lulea HF in Sweden for 19 games that year, but when the NHL returned, Fernandez would be the top goalie in Minnesota. The 2005-06 season was Fernandez's best yet finishing with a 30-18-7 record in 58 games. Even still, due to another goalie coming through the ranks (Niklas Backstrom), Fernandez had to split his time in 2006-07, finishing with a 22-16-1 record in his 44 appearances. With a solid team all around, Fernandez and Backstrom would win the William M. Jennings Trophy for fewest goals-against in the NHL.

Unhappy with the playing time, Fernandez would be traded by Minnesota to the Boston Bruins for Petr Kalus. However, the first season in Boston (2007-08) was a horrific one, as he would only play in four games with a 2-2-0 record, as he would have both back and knee surgeries, as he was recovering. Fernandez bounced back in the 2008-09 season, though a back-up to Tim Thomas; playing in 28 games with a 16-8-3 record, playing enough games to win the Jennings Trophy again. After that year, without a contract, Fernandez faded into the darkness without a formal retirement.

It seemed that he could never get a fair shake, with prolonged time in the minors and having to split the time with other goalies-- Fernandez never seemed to get the confidence boost to really show how he could perform. Even when he did, it seems he got undermined one way or another. Even still; there's a lot for him to remember and a lot of other trophies that came his way-- which can't be all that bad in the end.
Posted by ScottyWazz at 8:00 AM