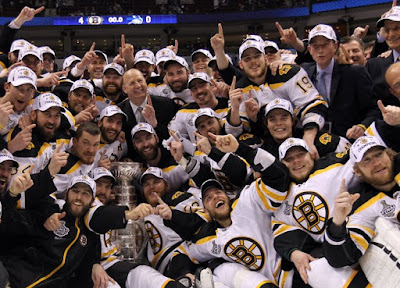 It took almost 40 years, but the Bruins get to drink for Lord Stanley's chalise once again. A team that played with a lot of heart, a lot of grit, and had their fair share of controversial moments got the ultimate prize in hockey and will now get a chance to revel in the moment.

You could say the Bruins wouldn't be this far with Tim Thomas, who won the Conn Smythe Trophy for Playoff MVP and bounced back from hip surgery last season and was able to regain his #1 spot over Tuukka Rask. Thomas went through a lot in his career and it was definitely a great story for him to win the Cup. Considering he and Rask will be together once again next season, the Bruins should be in good shape in next for their defense of the title.

The forwards, who really had a committee scoring system this year-- are mostly all back for next season; with Brad Marchand as a RFA and Michael Ryder being the only UFA with Mark Recchi retiring. The question will probably be if there will be any movement from the forwards to get Marchand under contract, especially with the possibility of Marc Savard coming back. However, if Savard or even Nathan Horton have some relapses, that could give the Bruins a bit of breathing room when it comes to their salary cap situation. There shouldn't be any adjustment needed in terms of welcoming new guys into their system; which could be good or bad.

The same circumstance is happening with the defense, as the same guys are back for the Bruins, with only Tomas Kaberle and Shane Hnidy not having a contract, and odds are they may not be brought back either. My thought is that as long as the Bruins have Zdeno Chara back there, the rest are just filler. That said, Johnny Boychuk and Adam McQuaid played solidly on the blue line, while Andrew Ference added more veteran presence back there along with Chara.

Whether or not this solidifies Claude Julien being behind the bench for a while, he did show that he didn't let the rumors of his possible demise rattle him too much and was able to deal with some serious injuries and really bring home a winner to the Boston fateful-- the city who has won all four major sports titles in North America in a seven year span.
Posted by ScottyWazz at 9:10 AM