On the Topic of the Spengler Cup 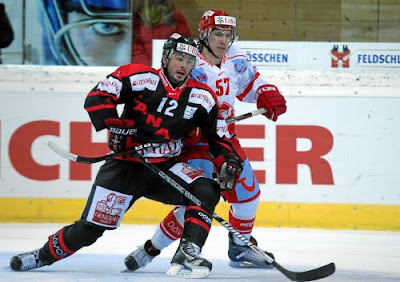 Lost in all the holiday hockey tournaments and return of the NHL into the holiday season is the Spengler Cup. The Spengler Cup has been held since 1923 in Davos, Switzerland (though not held a couple times due to WWII) and is one of the bigger stand-alone tournaments amongst European club teams. This year, the club teams are the host HC Davos and fellow Swiss team Genève-Servette, KHL teams SKA St. Petersburg and Spartak Moscow; Czech team HC Sparta Praha, and an entry from Hockey Canada.

While the others are club teams, the Hockey Canada contingent is a conglomerated team from players who are mostly based out of the Swiss Elite League, with the exception this year of Jeff Drouin-Deslauriers, who is playing in the AHL. While you have some teammates, the fact that this team didn't have much practice and still steamrolled a team like Spartak Moscow 6-1 in their first game shows how good the coaching staff of Mark Messier and Doug Shedden has adjusted these players to playing under one system. Granted, Spartak played their third game in five days and on the tail-end of the back-to-back games in their loss; but still.

The contingent of these players, like I said, are from the Swiss league, but there's plenty of former NHL and AHL talent on that team. Names you thought were long forgotten like Glen Metropolit, Mark Bell, Duvie Westcott, Brett McLean, Serge Aubin, Brenden Bell, Martin Kariya, Curtis Brown, and Tyler Moss-- all rostered on this team. Like I said, Deslauriers is the starter on this team and has played on the Oklahoma City Oil Barons most of the season. And while these guys won't be the most revered when it comes to being part of a Team Canada; it seems the coaching staff has done a great job to get the best Canadians on a roster to play in this game and while they probably could have asked for the release of some other minor league players-- the genius of getting guys from the Swiss league is fantastic. They didn't have to get guys adjusted to the ice size, didn't have to get them adjusted to the elevation (5,118 ft. above sea level; highest city in Europe), and won't have to get them adjusted to the ruckus crowd for when they take on the home squad and other local teams.

The tournament is something that does get lost in the crowd for most hockey fans, especially since there's not many mainstream teams and no US teams there. There's some Canadian fans who care about this tournament because there's a Canadian team there-- but it gets lost in the hype of the World Juniors and the holiday breaks that happen. When the Canadian team wins, they get some accolades, but it's not big-- even though it's the oldest invitational tournament there is in the land. Yet, does it have to be a big deal overseas so long as the players know what they did and what they've achieved?? Probably not, but it'd be nice to see these guys getting some recognition on a bigger scale than a small 30-second highlight pack of the final game. Luckily, TSN was able to pick up the tournament and will hype it-- even if it's relegated to TSN2 for some games in lieu of World Junior games.

This kind of tournament makes me wonder if there could or should be a Canadian National Touring team like they had when the Olympics were amateur competition, since players could play in any pro league to keep their amateur status and be able to play in the Olympics. While that idea probably wouldn't happen-- it could be interesting to see a team made up of Canadians just touring the globe to play random exhibitions against club teams and then going into tournaments like the Spengler Cup and show off their talents. Not likely to happen in this day-in-age, but still an interesting option for guys who may not be as psyched to go play overseas if they can't find anything in North America.

The Spengler Cup is something that should get more coverage, but it won't in the US because of a lack of invited team and it'll get dulled in Canada because of the World Juniors. It doesn't make it any less of the feat to win it, but there should be a little more attention given to it because it is a great event that's played in an amazing looking arena, to boot. Best of luck to those playing in it because it is exciting hockey to watch.
Posted by ScottyWazz at 8:35 AM

Email ThisBlogThis!Share to TwitterShare to FacebookShare to Pinterest
Labels: Hockey Canada, IIHF, International Hockey, On the Topic Of..., Spengler Cup