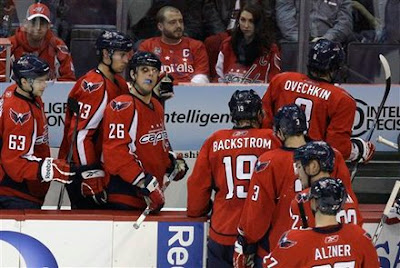 Ever since I saw my first game on February 3rd, 1989 when Bengt Gustafsson scored the only goal against Mike Liut of the Hartford Whalers (on Gustafsson "shirsey" night, no less), I was a Caps fan. And when being a Caps fan, heartache seems to happen all the time. Lest we forget the Patrick Division playoffs when the Penguins always came back from being down 3-1 to win, but it just comes with the territory.

Yet, with all the history of heartache, why are the fans taking this eight-game losing streak so hard and why is the second guessing of everything and everyone associated with the Capitals organization??

Is the coaching of Bruce Boudreau finally reached its peak and it's time to move on??

Everyone loves Boudreau, which could make it hard to fire him and could cause a wave of backlash. However, if it seems to have reached its cresendo; you have to make a move. I don't think that it's at that point yet, but the first guy to go will probably be Boudreau since coaches are more easily expendable than anything else. As it seems that the Caps are trying out a new system of play, there's going to be some leeway; but at what point does Boudreau abandon the new style of play??

The idea of the new system of defense is something that will take time to get used to, especially since this is a team that's been a run-and-gun team for the past couple of seasons, so the adjustment will be a noticeable one, especially when they've been know to play the old firewagon hockey style. The players won't be as dynamic, the play will not be as exciting, and the team will show off their weaknesses when it comes to trying to adhere to the new system, but not knowing how to blend one style into another. They seem to be too concerned with sticking to the defensive side, they completely forgot about the offensive side of things. They just need one break, though.

Speaking of offense, the one big thing is the lack of offense from Alex Ovechkin. Many have even called for Ovechkin to either give up or get stripped of his captaincy for not being a leader. Before I go ahead, I'll say always that the team's best player doesn't need to be the captain, because they may lack a leadership quality. It's not a bad thing for the best player to not have the captaincy. In any case, Ovechkin seemed to do well with the captaincy when he got it after Chris Clark was traded to the Blue Jackets. The Caps and Ovechkin did an amazing job that first year, why are people calling for Ovechkin to not have the "C" anymore?? Are there any better leaders on that team?? Maybe, but at the same time-- those are the folk-hero players that fans like for one reason or another and probably won't do better than what Ovechkin is doing. It's just a bad run of luck for the team and they need a break-- especially Ovechkin, Nick Backstrom, and Alex Semin.

If nothing else the idea of the team buying into their own media hype that's killing them. Green is in National TV commericals, Ovechkin's got his own DVD and clothing line, Boudreau had his own book-- the fact people picked them to go all the way maybe had them buy into the fact they don't have to play the season now and will have things handed to them. Add the hype to the system change, to the bad breaks-- recipe for disaster.

In the end, there has to be an end to this streak one of these days and it could spark the Caps into the big run that'll help them get back into their old ways. However, Jonny P said on the December 15th Show that it's better to have this losing streak and system change now, rather than late in the season when they're trying to gear up for the playoffs. If there's a time to come up and stick with a New Year's Resolution, it's for the Caps to snap out of these losing ways and actually become the team every pundit and fans thought they could be this season.
Posted by ScottyWazz at 8:40 AM