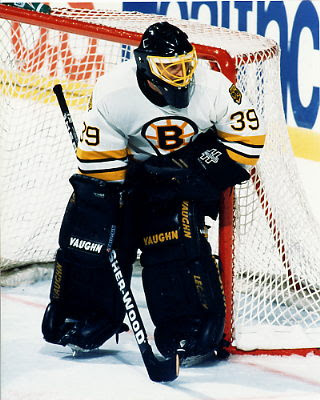 In the giving spirit of things, I'll give a chance to a lucky emailer to pick out the AGM for this week, and it's a great one at that (Thanks to Justin W.). From a kid who grew up in a hockey obscure market, then going on to being a surprise in the NCAA, going to the Olympics, then to the NHL-- but never panned out to the hype that go him there. While he was a higher rating than the starter in NHL94, he saw less than 50 games in his NHL career, but found a new calling when it was all said and done. This week, the career of John Blue.

The mention of a hockey obscure market is that Blue grew up in Huntington Beach, California, where surfing and volleyball seem to be the norm. However, Blue liked the calling of hockey and playing in net. So much so that he uprooted from California to move to Des Moines, Iowa in order to join the USHL's Des Moines Buccaneers and experience more competitive hockey. He would only play 15 games in the 1983-84 season, but he was exposed to where he needed to be in order to be successful in the game.

Blue went to the University of Minnesota starting in the 1984-85 season and Blue was able to get into the starting role in his freshman year. That year, Blue was stellar, going 23-10-0 in 34 games, including two shutouts. His performance got him WCHA Second Team All Star honors. Blue continued to hold-steady in the 1985-86 season, going 20-9-0 in 29 games, this time going into the First Team All-Star for the WCHA. Blue's play was able to get him drafted by the Winnipeg Jets in the tenth round of the 1986 Draft. With that momentum, Blue went into the 1986-87 season with confidence and it showed in his play, going 21-9-1 in 33 games on the year. In his time, Blue was able to get Minnesota into the NCAA Tournament, making it to the Frozen Four twice (1986 and 1987).

With his play in college, he was picked to help represent the USA in the 1988 Olympics, which meant that Blue had to leave school and go play with the US National Team in preparation. Blue would appear in 13 games for Team USA in pre-Olympic exhibitions, going 3-4-1. However, Blue was not used when the Olympics were played.

After he returned from the Olympics, his rights were traded from Winnipeg to the Minnesota North Stars for a draft pick. Blue would turn pro at the tail-end of the 1987-88 season, playing in the IHL for the Kalamazoo Wings for 15 games and going 3-8-4 and playing in one playoff game, which was a loss. The 1988-89 season was split for Blue, who would play for the Wings again for 17 games (8-6-0), but would also be shuffled to the Virgina Lanchers of the ECHL, where he would play for ten games with a 4.00 GAA. Blue would be shuttled around in the 1989-90 season, starting off with Kalamazoo for four games going 2-1-1 before being loaned to the Phoenix Roadrunners of the IHL, where he would play 19 games going 5-10-3. Blue would be sent to the ECHL's Knoxville Cherokees for 19 games, compiling a 6-10-1 record. Blue would also represent the USA in the 1990 World Hockey Championships, going 2-2-0 in five games of play. It was another roundabout season for Blue in 1990-91, where he would play with Knoxville for three games (1-1-0), then to the IHL with Kalamazoo for one game (a win), then out to play for the Peoria Rivermen for four games (4-0-0), then moving to the Albany Choppers for 19 games 11-6-0. Even with that moving around, Blue would play for Team USA again in the World Championships, though he wouldn't see any game time.

Becoming a free agent at the end of the season, Blue signed on with the Boston Bruins before the 1991-92 season, giving him some kind of stability, as he would play the season with the Maine Mariners of the AHL. Blue would get 43 games in during the 1991-92 season, going 11-23-6 for the season. Another call from Team USA at the World Championships, but another tournament with no games played. The 1992-93 season had Blue start with the Providence Bruins, where he would play 19 games with a 14-4-0 record before getting a call-up to Boston. In Boston, Blue would back-up Andy Moog and see 23 games of action, putting together a 9-8-4 record, also seeing two playoff games, going 0-1. Blue would start in Boston for the 1993-94 season, but would struggle in his 18 games, going 5-8-3 before being sent down to Providence, going 7-11-4 in his 24 games there. With the 1994-95 lockout, Blue didn't play much; but would start up in Providence when things got going-- playing 10 games with a 6-3-0 record, but would go 1-3 in four playoff games.

Blue was signed as a free agent in late December of 1995 by the Buffalo Sabres. He would play five games with the Sabres, going 2-2-0 before he was sent down to the Rochester Americans of the AHL. With the Amerks, Blue played in 14 games, going 4-6-1 and 0-1 in the playoffs.

The 1996-97 season relegated Blue to the WPHL, playing with the Austin Ice Bats, where he would split time with Chad Erickson. Blue would play 33 games and put up a 17-11-5 record, while going 0-2 in the playoffs. Blue retired after that season.

Currently, Blue is the Lead Pastor of the Pacific Pointe Church in Irvine, California. During is playing career, Blue's faith in Jesus was question and he turned to the Bible after looking at his life and how it had gotten away from him. Blue also held Bible studies with former NHLer Curtis Brown and current NHLer Brian Pothier.

Blue discovered that there's more to life outside the game and that hockey was just a game. Even though he did have some personal accolades, he did see a bigger picture in the end and followed through on it. Kind of ironic that he's profiled this week, as many celebrate the birth of Jesus. In any case, God bless Blue for seeing a bigger picture, bigger than himself.
Posted by ScottyWazz at 8:15 AM