Affiliates Moving On Up 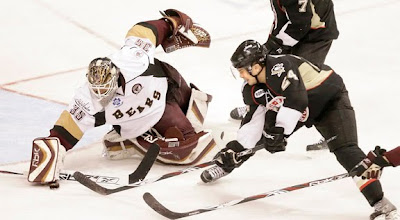 There seems to be an interesting trend that is coming to light recently. While games have been taken away from some NHL fans due to European travels and outdoor games; they have seemingly had some kind of reprive in the former of future players in their organization.

Starting tonight (December 30th), the Wilkes-Barre/Scranton Penguins will be one of three teams that will take the ice of their parent club. The Baby Pens will take on the Hershey Bears (the Washington Capitals AHL affiliate) at the Consol Energy Center, mostly as a lead-up to the main event on Saturday between the parent clubs. There's also a NCAA game there. However, me looking between the lines as I do-- this could be a way to give another game of revenue that is going to be missed from the arena due to the outdoor game on New Year's.

Subsequently, two other teams in the AHL will be doing the same thing. The Houston Aeros will be playing at the Xcel Energy Center on February 12th (NOTE: Thanks to Ms. Conduct from The Third Intermission for correcting this saying it's on the 13th, because a double hitter was a goofy idea) against the Peoria Rivermen as part of a day/night double-hitter, as the Wild play that night against the Blues (another NHL/AHL affiliation tilt). A few days later on the 18th, the Abbotsford Heat will be playing at the ScotiaBank Saddledome against the Oklahoma City Oil Barons in a mini-Battle of Alberta game, as the Barons are the Edmonton Oilers affiliate.

While this might seem just like a reasoning to get fans in the area more away of their AHL talent, the Wild played two games in Helsinki to open the season, one being a home game; while the Flames are playing in the Heritage Classic. It may seem like a long-shot opinion, but these AHL teams coming into the parent city could be a ploy to actually regain that lost home date in the arena and generate some more bucks.

While that's not a bad thing at all, it does seem to have a trickle down effect. Since these AHL teams are going to play in another arena, the fans at the AHL level lose a game because of it-- which isn't the best way to keep fans around. Even the most loyal of fan has to be peeved at something like. Houston is in the top-five of AHL average attendance (5,766), which has to sting a bit for their fans considering that driving to Minnesota probably isn't an option at all. In the case of the Penguins, whom are sixth (5,750), they could drive there to make up for it and see the new arena, but who knows the means some fans may have, especially with the holiday season being as it is. The Abbotsford Heat are in the bottom-five in attendance (3,382), so it could actually give them a boost when you think about it.

Even so, it's kind of a rough situation to try and pull off. It's good in some aspect, like fans who may not be as close to their prospects actually getting a live look at them, bringing in some exposure to them, and the players who get to experience what it feels like to be in The Show atmosphere if they haven't gotten a taste yet. However, it's definitely bad when fans have to lose a game at home because of one situation to another. And who knows what could happen if the ECHL team wants to play in the AHL arena and so on. The trickle-down theory could be in effect.....but doubtful, just my hypothesis.

In the end, it's all about the parent club getting some revenue in order to maybe keep the affiliate around and be able to generate interest in the home fan base for the minor league team. It definitely should peak the interest in those who aren't going to pay the NHL prices to see some good hockey in their NHL barn. Who knows if this trend will continue for teams that lose a home game or for teams who just want to get an extra date in their barn. As of yet, the other teams who participated in the overseas Premiere games (Boston, Carolina, Columbus, Phoenix, or San Jose) have yet to announce their AHL affiliate playing in their arena
Posted by ScottyWazz at 9:30 AM

Actually, the Aeros game was moved to the 13th last week. Apparently it took the team 6 months to figure out that having both games on the same day at the Xcel was a goofy idea.