Heater on the Hot Seat 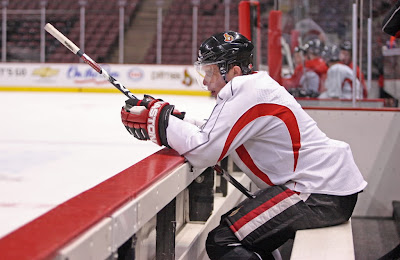 He has to be feeling that way, what with the fiasco that has gone on in the past few weeks with word of him requesting a trade out of Ottawa being leaked to the media, then Sens' GM Bryan Murray getting a deal in place with the Edmonton Oilers, but Heatley then blocking the deal due to his no-movement clause. Now, reports are coming out that the Sens could file a grievence because Heatley demanded a trade, then wouldn't lift his NMC; which I don't know how they'd win that one since Heatley was in every way right to keep his NMC clause in tact, but still-- this is turning into a bigger circus than it needs to be.

Now, with the July 1st deadline come and gone for the roster bonus of $4M owed to him, you wonder if Heatley will play the loyalty care of figure out a way to sneak out of town like the Baltimore Colts did in 1984. It's not like they can send him to Binghamton with his NMC in effect, which would not only bury him, but bury his contract-- and they could suspend him without pay if he refuses to show up to camp when it starts, but odds are he will, whether they want him there or not. Of course, that last scenario is pending on whether or not he's been traded prior to the Sens camp.

Yet, you look at this and you wonder how the Senators always get into trouble with a superstar player clashing with management. The Alexei Yashin drama was just getting out of the heads of some Sens die-hards and now-- it seems that Heatley is turning into Yashin 2.0. Sadly, Mike Milbury isn't around to make a horrible deal to the Sens in order for the Sens to save face. Albeit, also Yashin was his own worst enemy, Heatley isn't up to that level....yet.

While Heatley is claiming philisophical difference between him and coach Cory Clouston, did Heatley really expect things to be the same as they always were with a new coach behind the bench?? Especially considering the Sens haven't had a stable coach since Jacques Martin was given the boot. This is the fourth straight season with a new head coach to start the season for the Sens and you'd think in that time, Heatley would realize that they would be differences with the revolving door that's at the ScotiaBank Place. Though considering his numbers have been on the decline in the past two years (154 points in past two years in comparison to 208 points in first two years), maybe it's time to sell now. Sure, it's an ego hit and payroll hit due to the $4M bonus, but if he's going to continue to slide on the team, as well as be a disturbance in the locker room, let him make a deal for himself and that way everyone can be happy.

There's plenty of blame to go around for this situation to go as nuclear as it has been, with loose lips sinking ships, but ultimately, Heatley is one who is going to villified when all is said and done. He may not like the situation, but he couldn't expect that things would stay the same when he signed his six-year extension, especially in this day-in-age for the hockey business. The fact he's not willing to take a lesser role or accept change under the helm of Clouston also shows to some that he may not be a team player and is only in business for himself-- which I'm sure plenty of teams will be scrambling to get (sarcasm).

Donning my Sens fan cap for a second, I say you see what happens in the months leading up to camp. Feel out the process, while listening to offers and seeing which one would help the team out more and which Heatley would be willing to go for. If he still balks at the idea, you keep him on the roster and gauge the interest of his teammates as camp draws closer. Then you can see if he does show up to camp and go from there. If he does show up and his teammates want to see how it goes in the first part of it-- then observe and roll. If they have a pure detest for him, then hold him out of camp and see what deal you can scrounge up. Of course, should Heatley not report, then you suspend him without pay and rework as needed.

The end of this all will have everyone involved licking some sort of wound, some wounds bigger than others. Whether it's Bryan Murray, Dany Heatley, or even Cory Clouston-- there's going to be a lot of finger-pointing and armchair GMing to go around for the aftermath....if there is an aftermath.
Posted by ScottyWazz at 2:05 PM