How to Lure a Monster 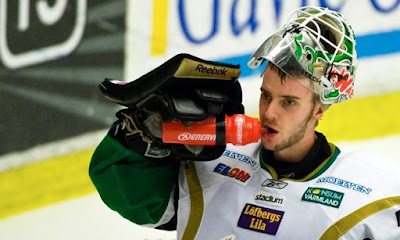 Though the title may be misleading, this isn't about how you can get Pierre McGuire to come out of his little box between the benches so you can punch him, nor does it have to do with my own personal things (wocka, wocka), but how you can get Jonas "The Monster" Gustavsson on your roster and lead your team to victory.

Gustavsson is the prized Swede of the summer, following Fabian Brunnstrom last season, which could spark warning signals considering how inconsistent Brunnstrom was with the Stars. It's a risk/reward situation when you bring a European trained goalie into the NHL. By all accounts though, Gustavsson will be fairing just fine in his new dig wherever they may end up being. Plus, since he'll be seen as a franchise goalie, the odds are that the team will build around him and give him what he needs to feel protected. That was the main issue why he said he was going to wait until after July 1st to sign with a team, in order to see which of his suitors would give him the most help in his first years over in North America.

You can bet that after hearing that news, any kind of other plans the Leafs had on the free agent market went into the can when they heard that news and focused on giving their goaltender some help, whoever it may be. However, to say they aren't hoping for Gustavsson to sign in Toronto is silly. That's the main thing they are gunning for, it seems, with the signing of two defensemen of the "shut down" style of play. Mike Komisarek and Francois Beauchemin will provide grit and solid defensive play for whoever is in the Leafs net this season, and if it happens to be a rookie Swede who was wooed by the two signings....sobeit.

The question remains on if the young Swede will go to a place where the defense is better or if it's a balanced system. There's the flaw by the Leafs, who do have a solid defense now, but the fact remains they don't have many guy who can bury the puck in the back of the net. If Gustavsson cares about goal support, that could be a detriment to the Leafs push in signing him.

But who else is out there for Gustavsson??

Depending on who you listen to, it's down to four teams: Toronto, Dallas, Colorado and San Jose. The issue with the Stars and Sharks is Marty Turco and Evgeni Nabokov respectively, both who have time left on their contracts and both of whom are workhorses. If Gustavsson wants playing time, he probably wouldn't want either of those teams. Colorado needs a solid goalie, but their hinderance is the lack of defense......or much of anything for that matter right now. It may take time and Gustavsson may be willing to grow with the team, but who knows his mindset.

That leaves Toronto, and we know Burke wants this kid bad because he focused so much on the defense and he's gone over and visted with him a couple times from April. He could be a cornerstone to the franchise, which is what the Leafs need in net.

While we await the decision, another thing is the Brunnstrom comparison I made earlier. It's harder to develop goalies into the NHL, especially if they have never played in North America prior. The risk you take with Gustavsson is that you throw him into the starting role much too early and ruin the kid's development in the process. It's a big deal to wonder if the chase is worth him being mediorce when all is said and done.

Only time will tell how Gustavsson will fare after he choose where he will go, but everyone in the hockey world will await with bated-breathe to see if the "Monster" will live up to the hype made by some.
Posted by ScottyWazz at 8:15 PM

But, Marty Turco ONLY has this year left on his contract and I am sure he will not be resigned.