Devil In The Details 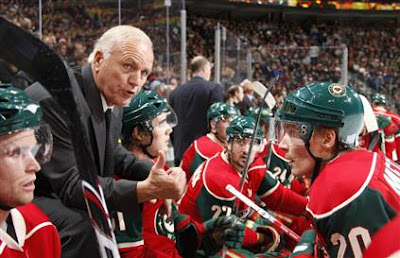 The New Jersey Devils announced today that they have hired Jacques Lemaire as their new head coach. This is going to be something, as the Devils are going through a transition period and have a stellar new goalie coming up by the name of Martin Brodeur. Something tells me this kid will make a name for himself soon, boy howdy.

Huh?? Oh, I'm sorry, I thought this was 1993 when this sort of thing happened the first time. But alas, it's 16 years later and 11 years after Lemaire ended his first reign with the Devils after the '97-'98 season.

One of the questions in this move is whether or not this is a smart decision. You have to wonder why the Devils bring in a guy who hasn't been the most successful in his coaching career. Sure, his technique and tactics are that of legends, but when you look closer at his history behind the bench, you soon realize that for a team that has had issues in the playoffs the past two seasons, Lemaire could be a step backwards for this organization. Though in his 15 seasons, Lemaire has gone 538-415-176 and one Stanley Cup with the Devils to show-- he has missed the playoffs in six seasons (three times in the last five seasons) and has only gotten out of the first round in six seasons, most early in his coaching tenure.

The fact that Lemaire is more defensive minded and has missed the playoffs in three of the last five seasons, it could be a telling sign that time and the game has passed him by. Especially for a team like the Devils who have had their share of issues when it comes to the playoffs recently-- you wonder why they make this decision over making longtime assistant John MacLean head coach with the big club, aside from putting him down on the farm in Lowell. While putting MacLean in Lowell is a start, you'd have to think he was a top contender considering his time he's put in as an assistant and how well he knows what's successful and what's not with this group of players.

But it's not something that will be new territory with this team. Aside from Zach Parise (and maybe Patrik Elias), there's not that much offensive swagger for the Devils to exploit anymore. This way, you have to figure that there's not going to be too much of an issue with the Devils going more defensive or there's going to be that much of a shake-up going from one style of play to another. Parise's numbers will probably suffer, sure, but if the Devils are going to rack up wins, I think the personal stats will be put aside for the time being....until the style wears out its welcome and changes are made mid-season.

Obviously, only time will tell how much the Devils will change and how the response will be from players and fans alike. The one thing I would have suggested is leaving the past in the past. Sure, Lemaire has a legacy and changed a lot of thing in the coaching game when defensive hockey was the order of the day, but when will people see that bringing back the past often creates more problems than solutions. Even though a coach has a ring from the past, it doesn't automatically mean they will be successful in the present day-- right Mike Keenan??

All the best to Lemaire in his new venture with the Devils, but for the fans out there-- you may want to hope that somewhere between Minnesota and New Jersey that Jacques picked up some high-tempo scoring techniques or realized that maybe offensive isn't that much of a bad thing in the end.
Posted by ScottyWazz at 8:10 PM