Broader Storylines For A Shortened Season 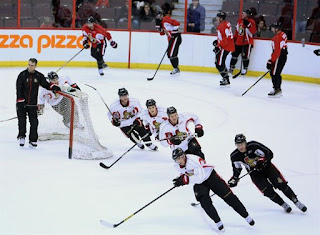 With the NHL season about to start, other people are doing previews or rehashing the ones that they did in September for the impending NHL season then. However, with a whole new element of a short season being brought into the mix, what can you as a fan look forward to?? For me, here's the underlying factors that could play a big role into the short season.

-Other Work Paying Off: The teams that had their players play either overseas or in the North American minor leagues will have a nice little jump start. They actually had game experience and have their legs about them. While the training camps will give them some rest and maybe slow them down for a short time, the fact they have had the game pace experience rather than informal practices-- those guys will have a jump; which will result in some interesting scoring leaders.

-Injuries Akimbo: Expect the injury reports to have a lot of "Groin" explanations next to it. We've seen it already from some players-- Jarome Iginla and Brooks Laich-- which will definitely make some guys stretch out more or even play with a little less reckless abandon. It could also let the players who had playing time expose those with less experience.

-More Urgency: Teams will not be able to have a down-swing in their game. Any kind of losing streak could mean the playoffs for these teams, which may expand the whole "parity" thing that the NHL has wanted from the 2004-05 lockout. You will probably a lot of more mix-up in lines or changes in game plans from the coaches if something needs to change, which could spark the team or throw them off their game completely.

-Less Urgency: If nothing else, we could see a lot more overtime/shootout games this season. As my buddy Dearen of Mr. Mikes in Airdrie said to me this past weekend, if there's a tie game in the third, you can see a lot of teams playing to preserve the point. That could happen in the front end of the season, but since it's all Conference play, later in the season-- you could probably see more risk from teams outside of the playoffs-- but expect some boring hockey in the third for teams not wanting to give up any points that are available.

That's four of probably many broad storylines out there I can see. I'm sure there's a lot more and people will expose the more intricate ones, but I'm not about being intricate. Plus, most importantly-- these will now not happen because I've put them out there.
Posted by ScottyWazz at 10:30 AM