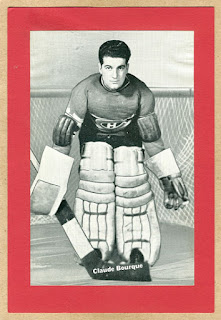 With humble beginnings and almost having his NHL days end before they started, this week's AGM built up his reputation from his home and then went to do what he could when he was called on to do so. Of course, it didn't help that the teams in front of him were horrible, but he made it-- so there's that. This week, the profile of Claude Bourque

The 1932-33 season had Bourque suit up for the Moncton Red Indians in the MCJHL and have a 4-0-1 record in five games, then 2-0 in the playoffs, while going 6-1-1 in the Memorial Cup tournament, missing out on the final series.

The Montreal Maroons owned the NHL rights to Bourque, but as they were going through financial turmoil, they traded his contract to the Montreal Canadiens, who would put him to work in the 1938-39 season-- playing in 25 games and finishing with a 7-13-5 record. Also that season, Bourque spent two games with Verdun, then three with the Kansas City Greyhounds-- all of those losses. The Canadiens brought Bourque back up for the 1939-40 season, playing him in 36 games and having him end up with a 9-24-3 record. The Habs loaned Bourque to the Red Wings for a game to replace injured Tiny Thompson (a loss) before sending him to the New Haven Eagles, playing in six games with a 1-5-0 record.

The Habs traded Bourque to the New York Rangers in the spring of 1940 and the Rangers sent him to the AHL's Philadelphia Ramblers, where Bourque would play in 56 games and finish with a 25-25-6 record. In the 1941-42 season, Bourque stayed in the AHL, but played for the Buffalo Bisons, compiling a 24-24-5 record in 54 games.

After that season, Bourque enlisted with the Royal Canadian Air Force and would play with the team at the base he was stationed at, Lachine RCAF and play in 34 games, as well as 12 playoff games, before hanging up the pads for good. Bourque passed away in May of 1982.

While he was bounced around Nova Scotia before getting into some bad NHL situations, it seemed that Bourque was willing to play on and was getting better before he went to war. It was a hard time to get a goaltending job in the NHL, which probably didn't help any confidence or need for stability in Bourque's career.
Posted by ScottyWazz at 8:00 AM