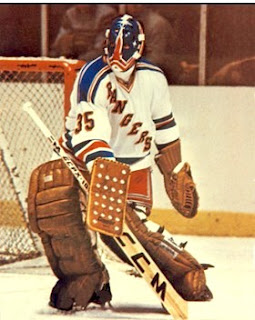 Unity is the theme for this week's AGM. He's a guy who stuck with the people who brought him up and didn't forget that, even in the wild world of hockey where you would stab your own mother in the back to get a roster spot. This week's AGM was someone who wanted to play, but under the right conditions. This week, the profile of Steve Baker.

Baker started his career when he played in Ontario Junior "B" with the Owen Sound Jr. Greys, where he would play 22 games in the 1974-75 season. During then, he was recruited by Union College coach Ned Harkness, where he would attending starting in the 1975-76 season; a season where Baker played in nine games and went 8-1-0. With Union in the 1976-77 season, Baker would play in 19 games with a 16-3-0 record, which lead him to getting drafted by the New York Rangers in the third round. In part of the 1977-78 season; Baker would go 3-1-1 in five games before Union College fell apart.

Handcuffed by Union College's president suspending player for academic issues-- something that Harkness was told wouldn't be an issue-- Harkness left the team. Baker, along with other players, left Union College; leaving that team to finish out the season with their JV roster. The president of Union resigned after that year.

For the rest of the 1977-78 season, Baker went professional and played with the Toledo Golddiggers for 10 games that year. The Rangers place Baker in the AHL with the New Haven Nighthawks for the 1978-79 season, where he would finish with a 15-5-4 record and would go 2-3 in the playoffs.

The Rangers went with Baker in the 1979-80 season, where Baker would lose only one of his first ten games. However, he would finish out that season in New York with a 9-8-6 record in 27 contests. Baker spent nine games in New Haven that year with a 6-1-1 record. Baker started the 1980-81 season with New  Haven, playing in 25 games and finishing with a 10-11-4 record before being called up to the Rangers, playing in 21 games and posting a 10-6-5 record; then going 7-7 in the playoffs.

The 1981-82 season saw Baker start with Team USA in the Canada Cup, where he would see one game-- a tie. Baker then went to the AHL's Springfield Indians where he would compile a 2-7-1 record in 11 games, then go on to post a 1-5-0 record in six games with the Rangers. The 1982-83 season saw Baker play a bulk of is games in the Central League with the Tulsa Oilers, finishing there with a 22-27-0 record in 49 games, while getting called up to the Rangers for three games, finishing with a disappointing 0-1-0 record.

For the 1983-84 season, Baker would go to the AHL with the Binghamton Whalers, playing in six games with a 0-4-1 record before being moved to the Maine Mariners, posting a 5-5-2 record in 13 games, then going 3-3 in the playoffs, on the way to Maine winning the Calder Cup. After that season, Baker would hang up his pads.

After hockey, Baker went to finish is degree in Economics at Union College, going into advertising with Fox Sports Net, as well as scouting for the Tampa Bay Lightning for a short time.

While standing up for what was right in college, Baker did get bounced around in his short career. Promising in New York, which quickly went to the wayside. The ups and downs of is consistency was something that really was the back-breaker for Baker's staying power.
Posted by ScottyWazz at 8:00 AM