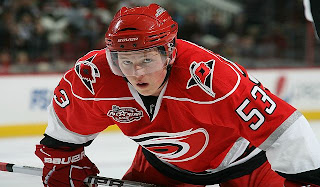 With the AHL in full-swing with training camp, one noticeable absentee is Jeff Skinner. The young forward said last week he wouldn't be reporting to the AHL's Charlotte Checkers camp for one reason or another. Carolina Hurricanes GM Jim Rutherford said that the decision for Skinner not to report was mutual between the club and the player, but it makes you wonder if this is a small alarm in what it could be like to deal with Skinner in the future.

Other players like Ryan Nugent-Hopkins and Jordan Eberle have reported to their AHL assignments (as well as Taylor Hall when he gets healthy again), same goes for Braden Holtby, Adam Henrique, and Brayden Schenn. Why does Skinner feel that he should be above the others and not actually continue to play at the higher level that the AHL is going to bring to the table this season??

Sure, the fact that Skinner has a Calder Trophy and been in the NHL full-time since he was drafted could be the reason he doesn't feel the need to be in the AHL at all because he feels he's above that. He's entitled to that thought, though it probably leaves a bad taste in the mouth of the Hurricanes management who actually gave Skinner a six-year contract extension, just short of $35M over the contract term.

Even though this AHL assignment could be above him, you almost would wish that he would continually want to play in order to keep his profile up. The Hurricanes were very aggressive this past summer with many offensive acquisitions (Jordan Staal and Alex Semin), so Skinner playing in any form probably wouldn't be the worst for him or the Hurricanes. Especially with how competitive it'll be for the top-six spots in Raleigh, Skinner could actually slip down the chart should be come out of the gates slow and then have the critics on his case for not taking the assignment in the first place.

Not only that, but it makes Skinner look like a prima donna when it comes to playing the game and not going for something that could only be good for him. The Washington Caps fans know about this an even made an animated GIF about it, too. If he doesn't actually pick-up his game when the NHL comes back into our lives, then we know that he made a terrible mistake by not actually taking this assignment. More over, it could sully his name when it comes to his standing in the Hurricanes book. While they say the decision was "mutual" the fact that Rutherford didn't want to overly argue with his young star could be a reason, hoping he would smarten up and actually take the assignment in stride.

There's still a chance that young Skinner would take the assignment and show up in Charlotte at some point in the AHL season, though he'd be a little behind. Considering the odds of him going overseas at this point are a bit lower than they were a month ago, the AHL could be the only outlet if the NHL is going to drag this lockout further. Skinner would probably be wise to head there (or somewhere) sooner rather than later.
Posted by ScottyWazz at 11:02 AM