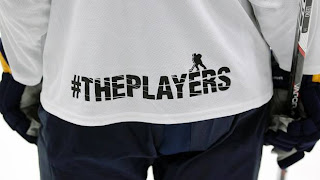 As we all know, tension is high when it comes to the lockout. Fans are getting stir-crazy, the information coming out is never good for too long or vague, and the people already presuming gloom and doom are licking their chops when it comes to their prediction being right.

More over, the players are becoming more and more vocal about this disdain for the owners and the lockout. Of course, the players have that freedom. The NHL has a bylaw restricting the owners or those in the front office from talking about the CBA or the lockout. Jim Devellano can attest to that.

But while the players have their freedom-- that freedom could be a little too much at times. Their accessibility has gotten them to say some things that make their staunchest of supporters do a double take. Amongst those are:


While it's good the the NHLPA to allow their members to freely speak their mind and frustration, they may want to reign in their contingency just a little bit-- maybe going full cliche mode for some of them. Especially with what Alzner said, it's almost like he's taking a knee early on.

The PA had the public opinion with them, and even with some people swinging hatred to both sides-- people still seemed to have an edge on the PA's side rather than right down the middle. Yet, with every comment that a PA member is making, the vitriol is being spewed their way in bigger spurts than there were at the beginning of this.

(In full disclosure, I do believe both sides are idiotic for letting it get to this point, the ownership side is one I'm a little more on the side of. Sure, I get that the players have dedicated their lives in order to get to play professionally in the best league in the world (so they say); the owners sank money into a team and while some of their management styles are sometimes ill-advised and short-sighted, I think many people can relate on not losing money on potential investments over getting paid to live your dream. Both sides are kind of pipe dreams on the larger scale of the Average Joe, but for the sake of explanation-- that's what I use.)

For the NHLPA, they got the social media movement out there from the start. Creating hashtags for their cause (as seen above on the NHLPA practice jerseys), putting out a viral video showing their passion, and just making sure their presence was felt to the masses and the people who will see what they are standing for, especially since the NHL owners have no voice due to the gag order.

With the PA allowing their guys speak their mind, it's a nice interactive instance from time to time. However, the more they speak, the less sympathy people are taking on them and the more annoyance it is becoming. It's one thing to be open and freely express your views, it's a whole other when those views start to sway people in the other direction. There are times when you can become too opinionated and people start to roll their eyes.

Social media or just the easy accessibility to players is the biggest it has been before. The NHLPA probably didn't take that into account for....well, most anything-- lockout or otherwise. While their campaigns on it have been widely well received, the fact of the matter is the thing they viewed as the biggest upside for them may end up being a big free-fall in favor, as well.
Posted by ScottyWazz at 8:54 AM